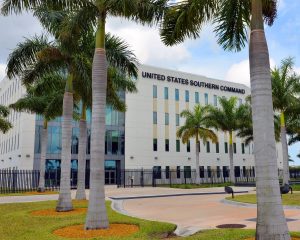 2 min read — The U.S. Southern Command (SOUTHCOM) moved its headquarters to Miami almost 22 years ago with revised priorities, objectives and capabilities. Since then, the command has had a significant impact on the local economy.

According to the Bureau of Economic Analysis, by 2017, SOUTHCOM had a combined economic impact in Miami-Dade of 53,151 jobs. It also had $5.4 billion in sales, a gross regional product of $5.1 billion and a 4% of total gross product since 2011.

SOUTHCOM is one of 10 unified Combatant Commands in the U.S. Department of Defense (DoD). And it is responsible for providing contingency planning, operations, and security cooperation in its area of responsibility, which covers much of the Western Hemisphere. It includes Central America, South America and the Caribbean (except U.S. commonwealths, territories, and possessions) and encompasses 31 countries and 16 dependencies and areas of special sovereignty.

Although the command was given its current name in 1963, its history as a unified military headquarters began during World War II, with the establishment of the U.S. Caribbean Defense Command, located in Panama. It was in September 1997 when the SOUTHCOM moved to Miami.

The command is now responsible for employing over 1,200 military and civilian personnel representing the Army, Navy, Air Force, Marine Corps, Coast Guard, and several other federal agencies. The defense industry has an economic impact of $5.5 billion on Miami-Dade County and it supports 56,476 jobs with an average salary of $70,300, according to data from Miami Dade Beacon Council.

The SOUTHCOM has played a key role on the overall defense industry impact in the county. Raymond Sarracino, spokesperson from U.S. Southern Command Public Affairs, explained in an interview with Miami Today that “in addition to salary, he or she (military active duty) will also receive $3,000 a month tax free for living expenses, which definitely plays a role in the economic impact of the community.”

The command’s workforce is supported by more than 400 civilian employees who play a crucial role in SOUTHCOM’s efforts to support security and stability in the region. They also have a Public / Private Cooperation (PPC) program which integrates non-governmental organizations, private companies, academic institutions, or other qualifying groups to foster society solutions for 21st century challenges in Latin America and the Caribbean.