South Jersey: Where this 3,700 square miles of potential currently stands

South Jersey: Where this 3,700 square miles of potential currently stands 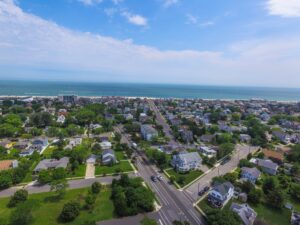 2 min read April 2021 — Don’t be fooled by its size; there is a lot happening in the 3,700 square miles of South Jersey, and people are taking notice. Enormous offshore wind projects, the Glassboro-Camden Line (GCL), and a booming industrial presence are among the facets supporting new growth in the region.

“South Jersey is finally getting a hard look from companies that never would have considered the region before. This is predominantly for two reasons. First, South Jersey is the only area in New Jersey where there is land available to relocate your business or grow and expand your operations. And second, New Jersey has enormously high taxes but in South Jersey our property taxes are considerably lower than other areas of the state,” said Christina Renna, president and CEO of the Chamber of Commerce Southern New Jersey. In an interview with Invest:, Renna goes on to say, “Companies like Amazon have exploded in growth across South Jersey and Philadelphia. We are also seeing a rebirth in food manufacturing and distribution industries; South Jersey was a manufacturing hub in the early 1990s and we are seeing that return.”

Renna commented that eds and meds-based communities, such as around Rutgers University-Camden and Rowan University in Camden, have also seen extensive growth, adding that the cannabis industry holds a great deal of potential given the vast agricultural space and farmland available in South Jersey.

However, the region has not been without struggle over this past year. Lockdowns nationwide brought businesses that rely on foot traffic to their knees, which presented great difficulties for the South Jersey community. “We are slowly starting to bounce back, but the biggest impact was the closure of our casinos for an unprecedented 108 days. That period led to some of the highest unemployment levels in Atlantic County because the industry supports so many jobs throughout the South Jersey region,” said Renna.

As discussed by Reynold Cicalese, managing shareholder of Alloy Silverstein, with Invest:, there are also concerns going forward in the pandemic’s aftermath. “Over the next year, you may find more businesses going bankrupt after PPP 1 and PPP 2. Individuals or firms that live week-to-week, need cash flow, are stumbling, or are highly leveraged will be in jeopardy over the next 12 months.” Cicalese goes on to highlight the significance of the deficit spending incurred during the crisis. “There has been a lot of assistance to individuals and businesses over the last year. Sooner or later, somebody has to pay for it.” Of course, these aren’t challenges specific to the South Jersey region.

The resilience and potential of the local economy and business community has left the South Jersey community in a, “positive position and entering 2021 on a solid footing,” said Renna, with the chamber playing a vital role throughout the pandemic in informing and engaging the local business community, hosting 222 online events over the course of last year.

Despite a tumultuous year, the South Jersey region is stable and prepared to capitalize on its potential. While some industries are recovering, others are blooming, and with so much opportunity, it is most certainly an exciting time to be doing business in South Jersey.