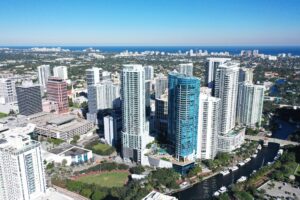 2 min read June 2021 — South Florida’s tri-county area is steadily getting back to work. Although all signs are pointing toward a strong economic rebound for the region, labor shortages within the hospitality and tourism sectors could threaten to impede this progression if they are not immediately addressed.

The overall lack of available high quality talent is one of the primary factors feeding into the industries’ pervasive labor shortages, as noted to Invest: by Jackie Volkart, general manager of the Ritz Carlton Bal Harbor and South Beach. “Finding employees is already a challenge, but finding people who love to work, and are willing to provide an incredible experience is a challenge.”

And while some may lay the blame on the overall unavailability of talent, others feel the issue is more deeply rooted in the state’s expanded unemployment benefits. In a study first reported by Local10, Florida Atlantic University released a survey where many believe those expanded benefits are the central issue to the labor shortage facing industries. In a statement to Local10, Peter Ricci, head of FAU’s hospitality and tourism management program said, “It caused them (workers) to reflect for a long period of time about what they want to do with their lives and if these crazy hours and low pay are worthwhile.”

Despite these challenges however, unemployment for two out of the three counties within South Florida remains lower than the national average, which sits at 5.8opens PDF file %, according to the Bureau of Labor Statistics’ most recent release. Both Palm Beach and Broward Counties tout average unemployment rates of 4.7% and 5.3%, respectively. Miami-Dade County lags behind at 6.9% unemployment.

In Broward, CareerSource Broward has created multiple hotlines to get workers back on the job, launching the Help4Hospitalityworkers.com and Help4aviationworkers.com platforms as well as their own Rapid Employment Program that saw over 1,000 people attend virtual job fairs and be matched with potential employers. Their efforts could not come at a more opportune time, as numerous headlines over the past few months have noted the surging demand for hotels and rising occupancy rates in Florida, a state known for its tourism, hotels and beaches.

Stacy Ritter, Visit Lauderdale’s president and CEO, told Invest: that the industry is still looking at a strong recovery, and even hotels that opened earlier saw high occupancy rates that suggested the industry’s recovery was happening sooner rather than later. “There are hotels that have opened despite the pandemic, such as the Hotel Maren, which had its ribbon-cutting mid-February and experienced 70% occupancy in their first weekend.”

Others in the industry are likewise bullish. “While we can’t predict long-term outcomes from this crisis, we are confident that our world and our industry will recover,” Tamas Vago, General Manager of the Hilton Fort Lauderdale Beach Resort, told Invest:.