South Florida hospitality down but definitely not out

South Florida hospitality down but definitely not out 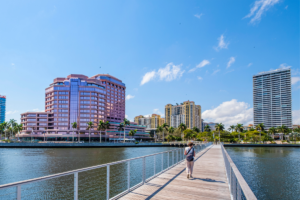 2 min read May 2021 — Amidst a national labor shortage that has hit the hospitality industry particularly hard, South Florida hotels are making the best of a bad situation.

Despite the strong demand across a variety of industries for more workers, Florida’s unemployment rate for the hospitality industry remains 24% over pre-pandemic lows, and barring drastic action, seems likely to remain that way for the foreseeable future.

The hospitality industry, which includes hotels, entertainment venues and restaurants, was among the most hard-hit sectors of the economy last year during the hardest months of the pandemic and ensuing shutdowns. As it stands, the challenge remains to return to those levels of activity prior to the onset of COVID-19.

While nationally the sector remains in a hard spot with little that looks like potential salvation, the situation does not seem to be as dire for the Florida hospitality industry, which has been boosted in part by an early opening of the economy, famously good weather and the strong demand across the country to go back to a normal life that has seen the city grow and rake in domestic tourism dollars even as the rest of the country remained shut down in large part.

In Palm Beach, The Ben and Canopy hotels reopened and saw strong business. While not quite a return to pre-pandemic form, it was much better and busier than dire projections that warned hospitality would take years to recover, if at all.

Canopy’s General Manager Christopher Steele told the Palm Beach Post that once February came, so did the demand, crediting Palm Beach’s in-person boat show in March as the catalyst for bookings. Likewise, hotels across South Florida have seen rising demand, bookings up and waitlists stretching far longer than anticipated.

The Ritz-Carlton Hotels located further south in Miami at Bal Harbour and South Beach, have likewise seen improved demand, as rooms are booked, restaurants have opened and people look to South Florida to enjoy a few days of tropical bliss.

When General Manager Jaqueline Volkart of both the Ritz-Carlton South Beach and Ritz-Carlton Bal Harbour spoke to Invest:, she said that, “tourism and business travel will continue to grow. The journey ahead is an exciting one.” The biggest hurdle? “I think the greatest challenge will be attracting high-quality talent.”

The rising demand has put the industry in a bind that seems unlikely to be resolved, as furloughed and former employees refuse to return to the market unless wages are raised or accommodations are made. Volkart, and other general managers such as The Ben’s Bernardo Neto and Canopy’s Christopher Steele, have all acknowledged the difficulties in finding quality talent looking to come back to work.

“The hospitality workforce was wiped out more than any other workforce in Florida,” Neto told the Palm Beach Post. “We basically told people to go find other jobs, and some of them did.” Volkart acknowledged the difficulty in an interview with Invest. “Finding employees is already a challenge, but finding people who love to work, and are willing to provide an incredible experience is a challenge.”

Wendi Walsh, secretary and treasurer of Palm Beach’s Unite Here! Local 355 chapter, explained to the Post that their concern stems beyond wages, as currently employed workers may have to work extra hours or see reduced benefits to keep a business going. “We’re finding that there is pervasive understaffing, so some workers will return and do the work of two workers, when they used to do one job,” the Post reports. “And some workers might be returned at a lower wage or reduced benefits to make up for losses.”

With travel to numerous countries in Latin America and Europe still off-limits due to the pandemic, summer 2021 will be busy with vacationers traveling within the United States, instead of abroad, but it seems unlikely that the resolution to this issue will arrive at a time when the rest of the country is slowly opening back up and South Florida sees even greater demand.

“Staycations were the play last year,” Neto is quoted in the Post, “and that’s going to be the play this year and maybe into 2022.”