Some banks go big on branches while others reconsider

Some banks go big on branches while others reconsider 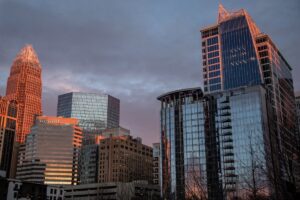 2 min read July 2021 — With the United States slowly beginning to close the door on the pandemic, it’s easier to tell what has changed and what may be staying the same. Change is never uniform which is clear in the banking sector as large players like Truist Bank seek to expand their presence in Charlotte while others reevaluate the need for certain assets.

Truist is planning to open its first Uptown branch at the company’s 214 N. Tryon St. headquarters. The Tryon Street branch is scheduled to open toward the end of the first quarter of 2022. It won’t be the only one by then, as the bank plans to have converted all of its existing SunTrust and BB&T locations to Truist by February 2022, reports the Charlotte BizJournal.

Truist’s expansion of its brick and mortar locations stands in contrast to banks like First Citizens Bank that recently announced the impending closure of one of its Charlotte-based branches. A spokesperson for the bank explained that the closure was a business decision as First Citizens performs an ongoing reassessment of its branch strategy in the region. First Citizens maintains other branches in the city.

These changes highlight an ongoing shift in the market, noted an Economist Intelligence Unit white paper, as banks reassess the future and look to pursue different avenues of growth by doubling down or exploiting gaps left in local markets to expand their presence. This is further exemplified by organizations like Fifth Third Bank, which opened three branches around Charlotte over the last two months as part of a larger North Carolina expansion that includes 50 branches across North Carolina within a three-year period. Twenty of those branches will be in the Charlotte market.

“We strengthened capabilities and continued to add and invest in certain markets,” explained Regional President for Fifth Third Lee Fite when speaking with Invest: earlier this year. “We are always evaluating what we do well and what we can do better … Looking at the mid-Atlantic region we cover, there are so many people moving here every day, even during the height of the pandemic. That brings a huge opportunity for us.” He added: “ We will also continue to make investments in terms of brick and mortar, technology and new platforms.”