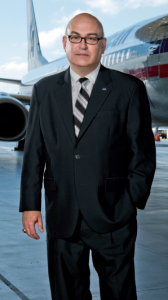 Miami International Airport (MIA) has seen incredible growth in recent years. What is the strategy to keep pace?

Broadening capacity is a priority for this airport and at the core of both our medium and long-term strategies. We service 40 million passengers each year – roughly the population of Argentina – and the airport’s capacity is 50 million; at some point we will run out of space.

To anticipate these needs, we are undertaking a number of major infrastructural upgrades. One project is to build 40 hardstands to park planes. Until recently, air traffic operated on peaks and valleys. You see no arriving flights at 2 a.m., but at 6 a.m. there is a surge of planes. Some of our aircraft, particularly those originating from South America, fly here and go nowhere else. They arrive at, for example, 8 p.m. from Brazil and stay until 11 p.m. Because of American Airlines’ recent reorganization, we no longer have the peaks and valleys, but instead, have constant traffic. Consequently, we no longer have the luxury of avail-able empty gates for us to park idle planes.

We must also accommodate growth in air freight, another important driver in this economy. We operate five airfields. One of them, our training and transition airfield, located in the middle of the Everglades, has a 10,000-foot runway. We are looking to convert that into a cargo airport sometime in the distant future.

What is MIA doing to upgrade its terminals?

We are currently renovating Terminal E, which is part of the central concourse. Interestingly, we are only launching this project as a stopgap measure to buy us time before we can build new structures.

Eventually, Terminals G, F and E will become two terminals. We will start on one end of the airport and work our way in, knocking down terminals along the way. We are looking to break ground on this project in 2020 and it will take 10-15 years to complete the terminal.

Because of its central position within the airport, and because of added traffic from the slew of new flights that American Airlines has announced they will be adding, Terminal E will be where the action is. Subsequently, we are investing in modernizing it. We recently purchased a $90-million train system to improve connectivity within the airport. This will be delivered in the next two years and has a lifespan of 10 years. In the distant future, we are looking to erect a high-end mall, which will have all of the major luxury retailers, in the central terminal.

What are MIA’s plans for broadening connectivity with respect to passenger business?

MIA is the second-largest international passenger airport in the U.S. However, in looking at our existing network there are a number of gaps. With respect to Europe, we need to improve connections with Eastern Europe and Scandinavia. We are looking to develop routes like Warsaw-Miami and Stockholm-Miami.

Asia is another big untapped market for us, in terms of passenger service. We already have cargo business with Asian companies, namely China Air, Korean Air, and Cathay Pacific, and those are usually one-stop flights that go from East Asia to Alaska, refuel and go back. I have spoken to representatives from different Asian carriers, and they all want to come here; it’s not a matter of “if,” but “when.” The “when” will happen when these airlines get new, larger, aircraft, for instance, the Dreamliners. When they start getting A-380s, then we will start to see an increase in Asian traffic coming here.

We are also working on getting flights to Africa. These don’t necessarily have to be through African carriers but could be U.S. airlines with Miami-Johannesburg, Miami-Lagos or Miami-Cairo routes.

MIA is the number one international freight airport in the U.S. What are the growth fundamentals of this segment?Being a gateway city, Miami sees cargo both coming in and going out. Planes arrive full of goods, and the only way they can generate a profit is if they also leave with full loads. From a cargo perspective, Atlanta can’t be Miami because they don’t have much to send back. At MIA, thanks to South Florida’s robust distribution and logistics operations, all of our cargo planes come in full of goods and they leave full as well. They arrive with perishables – flowers, fish, fruit – and depart with high-tech exports, such as electronics, medical technology, mining equipment and automobiles.

How does MIA contribute to job growth and economic diversification in South Florida?

The airport is one of the largest employers in Miami-Dade County, contributing nearly 158,000 direct jobs to the economy annually. It also generates a significant number of indirect jobs in related and peripheral industries, such as tourism, logistics, and manufacturing.

For instance, although it may not be very visible, there is a robust aerospace industry in South Florida. One of the largest airplane manufacturing companies, the Brazilian-based Embraer, has its U.S. headquarters in Ft. Lauderdale. B/E Aerospace, which is headquartered in Palm Beach and manufactures interior cabin products, has more employees than U.S. Southern Command (SOUTHCOM). The French-Italian aircraft manufacturer ATR recently relocated their North American headquarters to MIA from Virginia.

What are the most pressing challenges of operating an airport of this size and significance?

There are a lot of moving parts – some of it operational, some financial. The operational aspect is tied to the fact that we have over 90 airlines that fly out of here and they need a lot of care. We also have over 200 concession locations, which would make us one of the largest malls in the U.S., as well as related businesses such as a hotel, parking facilities, etc.

On the financial side, MIA is the largest economic engine – not just in Miami-Dade County, but in the U.S. Southeast, from Washington, D.C., down. To put this in perspective, we generate $1 billion more revenue than Hatsfield-Jackson Atlanta International Airport; we are bigger than Disney World and bigger than the Tennessee Valley Authority. When you generate that much wealth and economic business, everyone wants a piece of the action. Consequently, I get lobbied frequently and must ensure that proper procedures, when it comes to bids, are enforced at all times.

What is your strategic vision for MIA and your outlook on South Florida’s economy?

Currently, Miami-Dade is the Gateway to Latin America. Ultimately, our goal is to transform it to a global hub. We have the fundamentals to support this – strong tourism, real estate, logistics and banking industries – and MIA’s capital projects will only boost this progression.