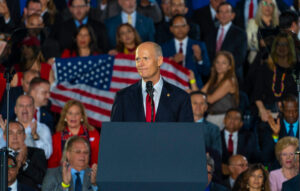 While Republicans have finally managed to eke out a House Majority over the course of this week, the Senate will remain in Democrat control for the foreseeable future. Some soul searching is underway, as the party attempts to identify the causes for its otherwise lackluster midterm performance. Per Sen. Scott, this means challenging long-time Kentucky Republican and Senate Minority Leader Sen. McConnell, who has led the conference since 2006.

“The status quo is broken and big change is needed. It’s time for new leadership in the Senate that unites Republicans to advance a bold conservative agenda,” wrote Scott on Twitter yesterday afternoon.

The Florida senator and former governor made the case to fellow senators in a Dear Colleague letteropens PDF file opens WORD file , and was quick to note there was no single reason as to the disappointing results of the midterms. “Like each of you, I am deeply disappointed by the results of the recent election. Despite what the armchair quarterbacks on TV will tell you, there is no one person responsible for our party’s performance across the country. I know there is no shortage of people who are eager to point fingers and assign blame here in Washington, but I won’t be one of them.”

Senator Scott is the Chairman of the National Republican Senatorial Committee (NRSC), a key fundraising arm of the party apparatus and responsible for providing the necessary campaign funds to Republican senate candidates across the country. Under his tenure, fundraising improved – but at too high a cost, with candidates and sitting senators alike wondering where all the money was spent.

While Sen. Scott may have announced his bid for the leadership, others have demanded an audit of the NRSC. During a tense Tuesday meeting, Senators Marsha Blackburn of Tennessee and Thom Tillis of North Carolina made the case that an independent review was necessary to fully understand how the party campaign arm spent its considerable $235 million haul and still fell short of securing a majority.

McConnell, who would become the longest-serving senate leader in 2023 and was first elected to the Senate in 1984, said,  “I don’t own this job. Anybody in the conference is certainly entitled to challenge me. I welcome the contest.” Scott has yet to complete his first term as senator, and favors a more combative approach closely aligned with Donald Trump, whereas McConnell has made it increasingly clear that he has moved on from the former president.

When asked to respond to Scott’s challenge that the lack of an agenda jeopardized Republican candidates and opened them up to attacks, McConnell highlighted his own record regarding his belief in candidate quality. “We underperformed among independents and moderates because their impression of many of the people in our party and leadership roles is that they’re involved in chaos, negativity and excessive attacks… I never predicted a red wave. We had a national issue set that was favorable, but as a result of the perception that many of them had, that we were not dealing with issues in a responsible way, and that we were spending too much time on negativity, attacks, and chaos, they were frightened, and they pulled back.”

The challenge comes while Republicans are increasingly divided over how best to move forward. Some, such as Scott, still believe that a strategy based around Donald Trump, who announced his second presidential bid the same day, as the way to win in 2024. Others have started to note the party needs a fresh face, with polling showing Florida Gov. Ron DeSantis as the preferred party standard-bearer for 2024. While Republicans across the country saw a weak performance, it was DeSantis that won big on election day, leading Republicans across Florida to big victories with large margins, and thrashing Democrat challenger, former governor and St. Petersburg Rep. Charlie Crist by nearly 20%.

While Republicans lick their wounds and Scott makes his case to conference members for his vision of the GOP’s future, in more ways than one, the party faces a number of choices to make about what’s to come.