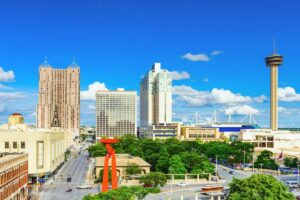 2 min read January 2022 —Everybody’s moving to Texas. That’s great news for local businesses and the economy. It’s not so good for the people looking for a place to live. The influx of residents has put an intense strain on the housing market, leaving real estate agents, contractors, lenders – anyone with anything to do with the housing industry – scrambling for solutions.

“San Antonio is an affordable city to live in with the lowest median home value in the major Texas metro areas,” Levi Rodgers, founder and team leader of Levi Rodgers Real Estate Group told Invest:. The migrants agree, and so does Zillow Group Inc. One of the largest online platforms for housing, Zillow ranked San Antonio No. 4 on its list of the top hottest housing markets in 2022. Austin, which took the top spot last year, dropped to No. 10.

According to Zillow, the top five markets on the list have seen not only strong home-value growth, but also strong economic indicators such as high job growth, fast-moving inventory and a large number of likely homebuyers.

San Antonio gained jobs in the two year period from Nov. 2019 to 2021, when nationally over 3 million jobs were lost. And even though the local market continues to face the challenge of low inventory and extremely high demand, Zillow expects the Alamo City to be Texas’ most competitive housing market in 2022, ranking it above most other major cities in the country.

Another major attractor to the area is money. According to a new ranking from HomeSnacks, the wealthiest city in Texas happens to be a suburb of San Antonio.The data provider awarded the No. 1 spot on it’s 2021 list of the most affluent cities in Texas to Terrell Hills. Also making the top ten in the San Antonio region were Fair Oaks Ranch at No. 8 and Alamo Heights at No. 10.

To come up with the ranking, HomeSnacks did not simply evaluate how much money the residents of the city make. They also looked at median household income, poverty rates, and unemployment rates for Texas cities with a population of 5,000 or more.

One strategy to circumvent the droves of people migrating to Texas has been to make better use of the resources available. New Braunfels City Council members recently approved the first reading of a proposed rezoning of nearly 30,000 acres of land near the Guadalupe River.

According to Christopher Looney, planning and development services director for the city, the River Mill TIRZ was created with the goal of incorporating multifamily housing, restaurants, retail space and outdoor space.

The property would be rezoned from a heavy industrial district to a high-intensity mixed-use district, pending approval after a second reading. This would allow the proposed River Mill development to include a multifamily component in its plans.

“San Antonio has an incredible cultural flavor that reflects our history and looks to our future,” Marsha McCombs Shields, managing partner at McCombs Family Partner, Ltd. told Invest:. “It’s a great location for families and for people to be surrounded by other like-minded individuals. Many people are relocating to the area and they are welcomed and quickly knit into the business and cultural community.”