San Antonio is doubling down on bioscience and healthcare

San Antonio is doubling down on bioscience and healthcare 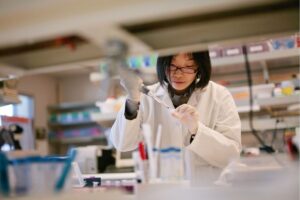 2 min read August 2021 — In an effort to consolidate San Antonio as a national epicenter for bioscience and healthcare, the local government, as well as the private sector, are making tactical moves to bring more investment to an industry that already employs one out of six workers in the city.

With a robust network of higher education institutions and the presence of military-related health services, San Antonio has the potential to compete for investment with other cities in the state where biotech and healthcare are also booming. Business leaders in the bioscience and healthcare fields have taken note of this favorable situation, which has led some companies to undertake projects of expansion and efforts to attract new investment.

Heat Biologics, a North Carolina Based bioscience company, announced this month an expansion of its operations in San Antonio through its subsidiary Scorpion Biological Services. The company’s plan is to convert a 20,000-square-foot storage building into a state-of-the-art research facility which will be used to advance therapies for a variety of cancers, infectious diseases, and even COVID-19 . To back the ambitious project, the city of San Antonio and Bexar County have approved $10 million in tax abatements for the project.

In a city council session last week, Mayor Ron Nirenberg applauded Heat Biologics for investing in the city, and suggested that this might encourage other companies in the sector to either invest or relocate to San Antonio. During the same event, Jeff Wolf, Heat Biologics’ CEO, expressed his gratitude with the city authorities for facilitating the expansion of the company.

Another major-player that is capitalizing on the momentum experienced by San Antonio is BioMedSa, an organization that is not only expanding its operations in the city but also conducting events to attract investors. Last month BioMedSa announced its intention to relocate its headquarters to an 1,800-square-foot building near Fredericksburg Road, a location that is already congregating most of San Antonio’s bioscience activity.

In addition to changing its location, BioMedSa is also launching BioFest Invest, a virtual gathering aimed to bring investment to the bioscience sector in San Antonio. “One of the recurring needs is better investment opportunities for emerging companies,” said BioMedSa’s CEO, Heather Hanson, during an interview with the San Antonio Business Journal.

Another recent development involves an agreement between San Antonio-based Clearday and the New York-based innovation and investment platform Sterling Select Group. The deal focuses on channeling capital, professional guidance, industry relations and other resources to Clearday. The San Antonio-based company is looking to establish partnerships with healthcare providers to eventually undertake research and development projects.

“Our agreement with Sterling Select Group gives us superb access, on an exclusive basis, to their numerous top-tier relationships in health care and [with] real estate companies which can accelerate the market development of our Clearday at Home and Clearday Clubs services,” Clearday Chairman and CEO Jim Walesa said during an interview with the San Antonio Business Journal.