San Antonio airport ready for expansion to take off

San Antonio airport ready for expansion to take off 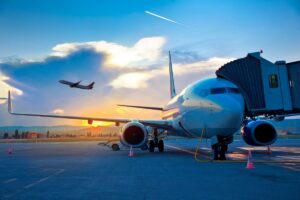 2 min read October 2021 — Three years and a pandemic later, a project to enhance San Antonio International Airport is back on track and ready for a vote.

San Antonio Airport System (SAAS) launched its Strategic Development Plan in 2018 to keep up with the expected growth in the number of passengers coming through San Antonio International. If the plan is approved, construction could begin in three to five years, although several studies are still required before groundbreaking takes place. The SAAS has been studying the proposal for the past three years and will present it to the City Council on Nov. 10. A vote on the proposal is expected before the end of 2021. The lynchpin of the expansion is a new Terminal C, at a cost of $1.5 billion, that is expected to be completed by 2030.

The airport’s expansion comes at a time when people and businesses are moving to San Antonio in droves. The city is the seventh-biggest in the country. Its airport sees more than 10 million travelers each year and government officials expect these numbers to almost double in the next 20 years. Although the pandemic put a halt to all travel, now that restrictions are being lifted, the proposal to expand and update San Antonio’s airport has been fast-tracked to satisfy the expected demand.

According to My San Antonio, additional infrastructure to be updated, or expanded, includes a central security clearance, an expanded parking lot with an additional 1,500 spots and a “San Antonio feel” to go along with the city’s branding. The main runway will also be expanded from 8,500 feet to about 10,000 feet under the Master Plan 2040  to renovate the airport. Right now, San Antonio only offers international flights to Mexico. With the expansion of the runway, the airport will be able to  accommodate larger planes, such as the Boeing 787 Dreamliner. These larger planes will allow the airport to offer flights to South America and Europe.

According to the city’s website, the project will be mostly funded through the Airport Improvement Program. This fund is administered by the Federal Aviation Administration, which means that the project will not  raise taxes for San Antonio residents. Funding for the airport will come from taxes and fees related to the usage and operations of the airport and its users, including fuel taxes paid by airlines and ticket fees paid by flyers.

While many things remain to be determined, such as the number of grants that San Antonio will be able to secure from the FAA and the number of gates to be placed in Terminal C,  one thing is certain: the city and the airport are determined to increase operations. To that end, San Antonio will host the Routes Americas 2022 convention on Feb. 15-17, 2022. The event will provide a unique opportunity to pitch airlines to expand operations to San Antonio, even before groundbreaking for the airport expansion takes place.