San Antonio aims for the sky

San Antonio aims for the sky 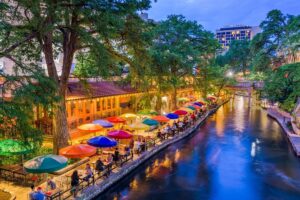 2 min read August 2021— San Antonio is a region on the rise as the sunbelt destination continues to attract both tourists and incoming new residents, sales tax revenue for the fiscal year 2022 is up 11% over what it had been in 2019 and traffic at the airport is on a steady incline despite the pandemic. All of these positive indicators plus more are reflected in the proposed $3.1 billion city budget for fiscal year 2022.

On Aug. 12, the city of San Antonio hit a new milestone when City Manager Erik Walsh unveiled its first ever annual budget exceeding $3 billion. The proposed operating budget of $3.1 billion for the fiscal year 2022 exceeds the previous year’s by $200 million and reflects what has been a surprising year for the city’s revenue in spite of the uncertainty surrounding the ongoing COVID-19 pandemic.

A number of factors have contributed to the this increase, but leading the charge was growth in sales revenue, which has been more robust than previously anticipated and reflects a strong economic rebound since the pandemic first struck, as well as millions of dollars of stimulus money that has been designated to protect the economy in the face of the pandemic. The City Council is due to vote on the suggested budget in September.

New arrivals and investment companies are paying for properties in cash and above the asking price. Even though the city government has no plans to raise the property tax rate, an extra $20 million in property tax revenue is expected to be collected over the previous year ($11.3 million of this is from newly constructed properties). These figures are all the more surprising when considering that hotel occupancy tax revenue has dipped 24%, which is undoubtedly a factor of the pandemic.

Money from President Joe Biden’s signature American Rescue Plan Act (ARPA) makes up a huge component of the city’s budget. Of the $326 million in ARPA money allocated to San Antonio, half has already been spent and the rest is expected to come to the city in the second half of 2022. In the recently announced budget, nearly $100 million of the federal stimulus money will be used to add to the general fund and supplement losses incurred by the occupancy tax fund.

It was announced that the flushed coffers will allow for a $1.2 billion municipal bond, marking the first time it has gone past a billion. Prior to the pandemic it was estimated to be at $980 million before being drawn down to $675 million. The surprise growth of the city’s economy allowed officials to restructure the debt management plan to the impressive figure at which it now finds itself.

The budget has a lot of areas to cover. A general breakdown follows: $1.36 billion for the general fund, $1.12 billion for restricted funds (airport, development services, and solid waste) and $592.2 million for the FY 2022 capital budget.

The larger sum now constituting the budget will be put to use in ways that will make the city safer and see its employees and residents better off. All budget cuts made in the face of the pandemic, which affected street maintenance, economic development programs, and housing, will be rescinded.

All city employees will receive a 5% raise in the coming year. Infrastructure stands to benefit, with $16 million more allotted for street maintenance, $21 million more for sidewalks, and $5.8 million for streetlights. The police budget will go up by 3%, funding 12 new community police officers and three new bike officers.

In keeping with the tenor of the recent crisis, when the sacrifices of health workers came front and center, public health will get a boost, especially as it relates to mental health. The emphasis on mental health is in keeping with innovative new policing tactics whereby the police department will be better equipped to respond to mental health calls by attending to them in the company of a paramedic and a clinical specialist. This new approach also applies to domestic disputes and issues surrounding homelessness. Finally, a city-wide diversity, equity, and inclusion office will be established consisting of 17 employees.

As promising as these changes appear to be, there are still some reservations among officials. This is a budget built on optimism, but the pandemic is not yet over. The recent delta variant surge, which has become increasingly more prevalent since the budget was announced, has made it abundantly clear that San Antonio, as with the rest of the world, is not out of the woods yet.