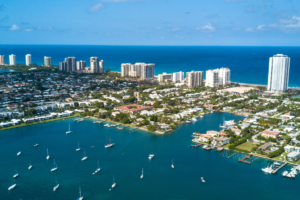 2 min read May 2021 — After a long and difficult year that saw many people stay indoors and look for creative ways to pass the time, Palm Beach County is bracing itself for what promises to be one of the more rowdy Memorial Day weekends in recent years, with boaters expected to come out in force. And so will marine officers, hoping to keep things safe.

Be it on the local lakes, the famous Intracoastal Waterway, the sandbars that dot the coastline off of Jupiter or Tequesta, Peanut or Beer Can Island, thousands of boaters, canoers, paddle-boarders and kayakers are expected to be out on the water this weekend.

“We’re out here to educate boaters and enforce safety. A simple conversation with a boater almost always solves the problem,” said Jupiter Marine Patrol Officer Adam Brown in a statement to the Palm Beach Post. With over 40,000 registered boats in the county and captains who may have only just bought their first boat as a result of pandemic boredom to those who practically live out at sea, the combination of factors creates a dangerous situation that has seen South Florida lead the way in boat-related deaths since 2015.

Between the sunshine and the extra day off, alcohol and inexperience play a role in the danger present with so many boaters and ocean-goers out on the water. According to the U.S. Coast Guard, alcohol consumption has been the leading contributor to boat-related accidents, with fines ranging anywhere from $500-$1,000 for a first offense.

Inexperience is another big factor. “Most boaters know they have to be extra careful. If they don’t, we explain it to them,” said Brown. Some of those who’ve been boating for longer appreciate the extra patrols, such as Hobe Sound resident Tom Brackenton who explained to the Post, “People buy hotshot boats with rocket engines. They only take them out on the holidays. You can tell them a mile away. They are the ones with the ladders dangling and the bumpers bouncing,”

And it seems plenty of people have been buying boats. CEO John Dorton of Miami-based Invincible Boats, in his conversation with Invest, said everyone is buying, even models that have yet to be released. “There’s only so much you can do inside your home. People were looking to get outdoors and enjoy the fresh air in a safe way … We have two or three new models coming out that have not even hit the market yet, but they’ve already sold out for the first year of production.”

“‘Record-breaking’ is how I anticipate boating and paddling activity to be on Memorial Day weekend. It’s a paddler’s paradise,” said Rick Clegg, owner of Jupiter Outdoor Center, which rents kayaks and paddle boards on Jupiter Inlet waterways in his own conversation with the Palm Beach Post.

With the long weekend just about to begin, local police agencies all agree: boaters both rowdy and civil will be on the water, but no matter what happens, they’re ready.