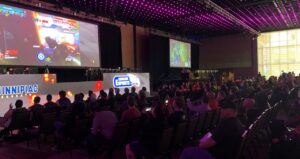 2 min read March 2021 — The gaming industry is no longer child’s play and the Research Triangle continues to position itself as a leader in this dynamic industry. The meteoric rise of esports in recent years has transformed the pastime from niche entertainment into a mainstream industry that drives billions of dollars of revenue each year.

In the Research Triangle, new esports competitions and new degree programs wholly centered around this growing industry point to the region’s continued efforts to be a leader in this space. Raleigh is set to host the first Collegiate Esports National Championship (CSMG) on April 29 to May 2 at the Raleigh Convention Center. This marks a win for both the future of the gaming industry in the region as well as for the travel and convention sector that is embarking on the recovery process following the COVID-related impact on the industry.

Raleigh’s experience in hosting large-scale esport events makes it a desirable location for this first national championship. In 2019, Raleigh hosted a Rainbow Six event and it has hosted the East Coast Game Conference for the past 11 years. “We are delighted to be hosting the Collegiate Esports National Championship here in Raleigh,” said Director of the Greater Raleigh Sports Alliance Tori Collins in a press release. “Our area has a long tradition of hosting successful collegiate championships in traditional sports. To be able to celebrate and showcase our globally recognized esports ecosystem supported by local companies such as Epic Games, Ubisoft, Lenovo, Red Hat and others is a win-win for us. Our commitment to esports player’s health and wellness remains paramount, and we along with our local partners are confident we can deliver a world-class event for everyone involved in 2021,” Collins said.

2021 is set to be a strong year for esports and the gaming industry. “Most projections put the esports ecosystem on track to surpass $1 billion in revenue for the first time this year. And revenue is expected to grow from here — Newzoo projects it to hit $1.8 billion by 2022,” Business Insider reported in January.

In February, William Peace University, a nationally-ranked institution in Raleigh, announced the addition of complimentary bachelor degree programs centered around interactive design and esports and gaming administration. Both programs are slated to begin this fall semester.

“Esports and Gaming Administration is a perfect fit for Raleigh and for William Peace University,” said President Brian Ralph. The global esports industry is expected to grow at a rate of 400% in the next seven years, to $4.28 billion by 2027, according to Data Bridge Market Research, the university reported. “Raleigh is home to numerous video game and esports companies along with e-sport events, and we can provide graduates with the skills these companies hunger for,” Department Chair of Art, Communications and Simulation and Game Design Prof. Roger Christman said in a press release.

The new program complements the university’s current major in simulation and game design while preparing graduates to be well versed in the business and technology aspects of esports.“These degrees will give students more options in these growing career fields,” Christman said.

North Carolina’s largest community college is also betting on the future of esports in the region. In February, Wake Tech announced the launch of a new competitive esports program, making it one the first institutions in the Triangle to have esports as part of its intercollegiate athletics program.

“Esports is a perfect fit for our college,” Wake Tech President Scott Ralls said in a press release. “In Wake County, esports and game development are not just fun and games, they are big business. We’ve always had a unique role in terms of game development and simulation at Wake Tech. We have what I think is the best Simulation and Game Development program in the country.”

Added Wake Tech Athletic Director Brian Anweiler: “We know esports will be a very popular addition to our athletic offerings at Wake Tech. We already have students competing in these popular games, and now they can play as Wake Tech Eagles to compete against students here in North Carolina and across the county.”

St. Pete Pride is back with a month of festivities minus parade