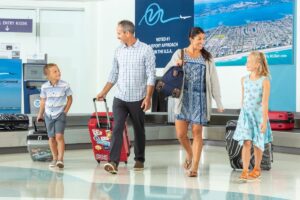 “Florida is extremely popular to European travelers. … As a result of being shut down for two years, there’s a lot of pent-up demand,” Greg Donovan, executive director of the Melbourne Orlando International Airport, told Invest:. “Our airport is currently at about $3 billion of annual economic impact, and I think 2022 will be a record-breaking year as our airport grows its presence as the coastal gateway to Central Florida. We expect at least 150,000 new international passengers in 2022, who will be spending money here. Some of that also translates into real estate sales and business opportunities.”

With the inaugural flight from the United Kingdom to Melbourne Orlando International Airport scheduled for March 22, an estimated 150,000 international passengers are expected to land in Melbourne by the end of 2022. Melbourne officials are aggressively working to keep those tourists in Melbourne, at least for part of their stay, according to local news reports. Key attractions, they say, are Melbourne’s beaches and access to other areas in Florida. Additionally, British cruise line Marella Cruises — also owned by TUI Group — is offering cruise deals from Port Canaveral to locations like New York City and the Caribbean. The port is just 41 miles north of the MLB airport.

Providing the smaller, regional airport a competitive edge is its active status as a hub for the Department of Defense, as well as several aerospace companies and aircraft manufacturers, with about 20,000 employees at the airport daily working on aerospace projects in defense and commerce, Donovan said, including Northrop Grumman’s work on the Long-Range Strike Bomber, the B-21 Raider, which is set to replace the B-52, B-2 and B-1 bombers.

Currently, the airport is working on a $72 million terminal construction project that will enable it to offer the latest technology for passenger screening and safety, as well as a federal inspection station so the new international passengers can be processed through customs in a faster, more efficient way. The airport has also seen $180 million in new infrastructure improvements to the airfield. The new improvements were needed to ensure the airport can accommodate TUI’s Boeing 787 Dreamliner, a jumbo-sized jet, and the increase in passenger traffic.

And further improvements are on the way, with ABANCA USA and Banesco USA announcing in February that they were able to close a credit facility worth $18 million to begin construction of a new, 143-room luxury Hyatt Place Hotel just one mile from the airport. The Hyatt is expected to open its doors to guests in January 2023, according to a news release.

And the airport isn’t just attracting international passengers. In November 2021, MLB welcomed its inaugural flight from Charlotte on Allegiant Airlines. Allegiant plans to offer flights to Pittsburgh, Nashville and Concord, N.C., according to Florida Today.

“When it comes to commercial activity, airlines are straying from flying on top of each other. They’re looking for more point-to-point activity and that’s an opportunity for smaller airports to be discovered,” said Donovan. “It’s a regional impact and if you offer a distinctive product or service, it really opens up the door for airports of our size and we’re positioning ourselves to facilitate that.”