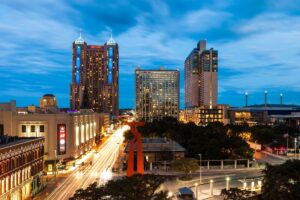 2 min read June 2022 — As the summer gets underway, the real estate market also tends to spark. Whether looking for a new home or apartment to rent, buyers are facing high prices and low inventory. But experts are starting to see signs of a turnaround in the booming housing market.

In April, Realtor.com reported the smallest year-over-year decline in active listings since December 2019 at 12.2%. There was also a slight increase in listings for moderately sized homes, which could foster an increase in the number of starter homes on the market as people in those homes look to upgrade.

While there may be a slight increase in the amount of available houses, the price of those homes is still a challenge. According to Redfin Corp, on the average, homebuyers need 34% more income than they did a year ago to afford a house in the United States. Experts are hopeful that the increase in housing prices will lead to fewer buyers, which will help stabilize the market.

For the time being, potential buyers still face a high-priced housing market. Texas also has a history of weathering a volatile real estate market. A Fortune.com article highlights that in the early 2000s there was a similar inventory shortage and investors rushed to fast-growing markets to purchase property. Texas, however, kept lending practices very conservative and when the market crashed in 2008, the Lone Star State didn’t bear the brunt of the resulting foreclosure crisis.

This time around, Texans may not be so lucky. U.S. home prices have risen 19.8% over the past year, which is more than four times greater than income growth during the same period. According to Florida Atlantic University researchers, Austin is the second-most overvalued housing market in the nation. The median home in Austin is worth $589,600, which is 66% above the $354,600 limit that the researchers say is supported by underlying economic fundamentals. Only Boise, Idaho, at 75%, was overvalued more. Other ranked Texas cities  include Dallas, which is overvalued by 46%, San Antonio, overvalued by 30%, and Houston, overvalued by 28%.

The work-from-home migration to Texas due to the pandemic has played a hand in this trend, according to Fortune.com. Californians are especially drawn to Texas due to similar weather but lower housing costs. Texas’ business-friendly environment also captured the attention of Fortune 500 companies, such as Hewlett Packard Enterprise, Oracle and Tesla, which all moved their headquarters from California to Texas in the past two years. Those relocated employees all needed a place to live in Texas.

For those who decide to put their house on the market, the best time of the year to sell a home is now. According to real estate data firm ATTOM, the best time to sell a home for more than 10% of market value is in May, June and July. But those that are selling in the current market also have to factor in the increase in interest rates, which affects the monthly mortgage payment on their new home.