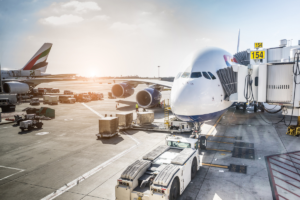 2 min read May 2021 — While the Raleigh-Durham International Airport still sits below pre-pandemic numbers, the airport’s continuing expansion of services hints at a thriving summer.

American Airlines first announced that it would bring back nonstop service between Austin, Texas, and Raleigh-Durham on July 2. American then followed this announcement with even more offerings, including seasonal Saturday service to Destin and Orlando and nonstop flights to Nashville. The Destin and Orlando additions will run June 5 through Aug. 15, while the Nashville offering will begin June 2.

COVID-19 took a toll on the aviation industry, as Michael Landguth, president and CEO of Raleigh-Durham International Airport, highlighted in his interview with Invest:.

“The initial impact of the pandemic was unprecedented,” said Landguth, “We lost 96% of our customers in April 2020 and the recovery has been slow, particularly in the business travel segment. But with all the precautions we have implemented, we believe air travel is safe, and our customers agree.”

Economist and professor at N.C. State University Mike Walden indicated to the Triangle Business Journal that this update is a sign of the recovery on the horizon.

“With economic forecasts becoming increasingly positive, companies are now more aggressive in taking new initiatives,” Walden said. “While the airline industry will take a while to fully recover, their projections are much more upbeat now than they were even six months ago. This attitude, combined with the fast-growing reputation of the Triangle — as evidenced by several major business and commercial announcements recently — is behind the addition of routes from RDU.”

Raleigh-Durham International Airport’s trajectory was solid prior to the pandemic, with a nonstop list of 57 locations. After a stark drop during the pandemic, that number has inched up to 39 with the expansion of the vaccine rollout.

“Widespread distribution of the vaccine will ignite the economic recovery for airports around the country,” said Landguth to Invest:. “We surveyed RDU travelers in March 2021 and 72% of those who have been vaccinated said they’ve either flown since they got the vaccine or intend to book travel after they are fully vaccinated. As more and more people get the vaccine, increased levels of holiday bookings will drive passenger traffic.”

The airport has been operating on a “survival budget” since the early days of the pandemic, shuttering multiple parking lots across the campus; some expect the lots not to reopen until 2022 though traffic has ticked back up. The airport’s Park Express initiative, a concierge service to pick passengers up from their cars, is expected to be closed until 2024.

Landguth is optimistic about the airport, the progress already made and its importance to the region.

“We are an economic engine for the Research Triangle region and the country, and we will rebound from this,” said Landguth. “According to 2019 figures, RDU has an economic impact of $15.1 billion per year, supporting nearly 100,000 jobs and generating $500 million in state and local taxes to support our businesses and residents. That is significant and it positions the airport to lead the regional recovery.”