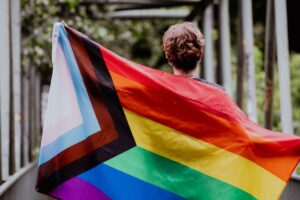 2 min read June  2022 — During Pride Month, now underway, many companies change their logos to rainbow-themed displays of support. But do they all mean it?

#RainbowWashing is a recently coined term used to describe companies that superficially partake in the Pride celebrations to generate economic returns. A similar, more popular term is greenwashing, which makes people think a company or a product is environmentally friendlier than its competitors when it’s not. In other words, adding “-washing” alludes to some companies’ broader strategy to gain “clout” without actually caring about a specific cause.

“It seems hypocritical that some companies only support LGBTQ+ people during Pride Month, yet when there is a judicial or societal issue, there is silence from the same companies. Symbols of pride should not only exist in June when it is financially beneficial to a company,” Renair Amin,  LGBTQ+ Inclusion Consultant and Trainer, told Invest:.

“That type of marketing tells me that businesses understand the impact of the Rainbow dollar,” Amin explains, referring to the rainbow-adorned products that can take over aisles, from candy to beer to clothing. To be clear, the two trends are not correlated: not every LGBTQ+-owned business displays rainbows and not every rainbow display supports the LGBTQ+ community. Consumers, however, might think that buying rainbow products supports the community.

A key reason why rainbow-washing is a must for some companies is that LGBTQ+ adults have a combined buying power of at least $3.7 trillion globally, according to LBGT Capitalopens PDF file . LGBTQ+-owned businesses themselves contribute $1.7 trillion to the country’s economy, according to the New Jersey Pride Chamber of Commerce.

LGBTQ+ people adopt the rainbow as part of their identity journey. According to a study published in the National Library of Medicine in 2018, the “youth are engaging in active processes of meaning construction through displays of affiliation, productions of positive affect and navigation using the rainbow symbolism.” By displaying a rainbow on their products, companies can secure easy access to a large segment of the population that is or supports LGBTQ+ people. The LGBT Capital study estimates 20 million LGBTQ+ people in the United States alone.

What can companies that truly wish to support LGBTQ+ people do? Display the rainbow but make sure it leads to a “pot” of factual support, Andrea Garcia, board director and vice president of marketing at the New Jersey Pride Chamber of Commerce, told Invest: “I appreciate that companies want to reach the LGBT+ demographic during Pride month. It’s equally important that they build authentic relationships with the community throughout the year. We need to empower companies to be LGBT+-friendly by including visual representation in their marketing, or reaching out to support regional groups.”

Companies should not be afraid to incorporate rainbows into their marketing if they truly support the cause. “If a business leader truly wants to be a leader, they take on the responsibility of cultivating a relationship with the LGBT+ community as an ally. Remember, performative marketing is cheap. Invest in building relationships that will build a track record as not only a good corporate citizen but also a community leader,” adds Garcia. Policies that can change performative allyship to meaningful allyship include hiring openly queer people, donating to pro LGBTQ+ organizations and politicians, allotting volunteer days for employees and educating employees on diversity, equity and inclusion.

“Corporations that take the time to develop a diverse supply chain by purposefully incorporating LGBT+-certified small businesses and other minority-owned businesses are setting themselves up for success,” said Stephanie Lokker, board director and vice president of supplier diversity and certification at the New Jersey Pride Chamber of Commerce. Companies can also look to chambers of commerce to acquire knowledge or partners that will help the organization practice meaningful allyship. “Procurement leaders who focus on building relationships with certified owners will make a local investment in making their communities stronger. Allies are necessary, as they hold the financial influence to potentially grow the entire economic disposition of a demographic,” Lokker said.