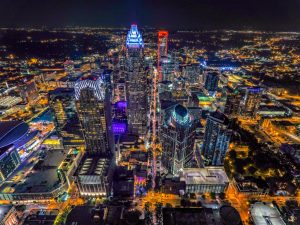 2 min read January 2020 — In the last decade, Charlotte rose from the devastating effects of the Great Recession to become the 16th-most populous city in the United States. The Queen City has experienced continuous years of growth thanks to the diversification of its economy, its budding headquarters relocation culture, steady commercial and residential development, and its “cool” appeal favored by the young workforce moving to Charlotte and its surrounding region. As the city prepares for another decade of evolution, growth, and development, public and private partners have their eyes set on the year 2040. Several complementary plans are underway that will help guide the future of Center City, the city of Charlotte and Mecklenburg County for the next 20 years.

Spearheaded by nonprofit Charlotte Center City Partners, in partnership with the city and county, the “ALL IN 2040” plan aims to establish a new blueprint for the growth and development of Center City, an area that encompasses Uptown and South End. Simultaneously, the city of Charlotte is working on its 2040 Comprehensive Plan, which will guide the growth of Charlotte overall, while Mecklenburg County rewrites its Park and Recreation master plan.

Michael Smith, president and CEO of Charlotte Center City Partners, said the Queen City has a strong legacy of careful planning for long-term development. “We’ve had four decades of deliberate planning and this decade has really defined Charlotte,” Smith told Invest: Charlotte. “Charlotte has launched a new, renewed Center City vision for 2040, called the ‘ALL IN’ plan. This is a great opportunity for Charlotte to carry on its legacy of planning. This is a 50-year tradition of creating these blueprints, each time looking several decades ahead, but renewing that vision every 10 years. This provides us with an opportunity to listen to our community, and to bring subject-matter experts in to help us understand some of the best practices around the world,” he said.

Much of the successful growth and development in Charlotte that occurred in the past decade was a result of strong public-private partnerships, which the “ALL IN 2040” plan will continue to develop and strengthen. “The plans and projects are co-created and co-owned with the private sector. In Charlotte over the last 50 years, we’ve had the public sector making transformative, shaping, stimulating investments in infrastructure, and the private sector responding in a collaborative way,” Smith said.

Infrastructure will be a strong focus of the “ALL IN 2040” plan, as well as the city’s 2040 Comprehensive Plan. “With the growth we have, we know we have to invest in transportation,” Smith said. Both plans account for major transit expansions to the city’s rapid bus transit and light rail systems. “All that infrastructure development is really needed as the city is booming with construction on the residential, office and hospitality fronts. Right now, there are almost 2.2 million square feet of office space under construction. Of that, there are about 700,000 square feet in South End, and more in Uptown. This is not speculative; there is a lot of pre-leased space in South End. As a matter of fact, about 90% of what’s under construction is pre-leased. It provides us with great confidence,” he said.

The “ALL IN 2040” plan and similar city and county efforts are meant to complement one another. Throughout 2020, residents are encouraged to attend public engagement sessions where they can give their input regarding the future of Charlotte and Mecklenburg County.

By the end of the process, a final draft will be created that will eventually head to the city council for approval and implementation.