Property Insurance in Florida: Why it’s skyrocketing and what you can do about it

Property Insurance in Florida: Why it’s skyrocketing and what you can do about it 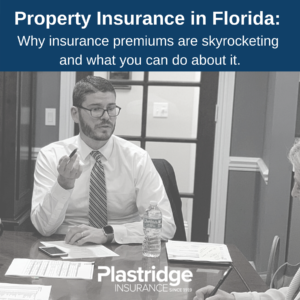 2 min read May 2022— If you’ve had to renew or apply for property insurance in Florida lately, you may have experienced a case of sticker shock. Insurance premiums are skyrocketing, with no relief in sight.

Understanding the nature of the rising costs of homeowner’s insurance and the premiums paid requires an understanding of Florida’s unique insurance market. While famous for its beaches, warm climes and waterfront living, those same attributes belie the threat from hurricanes, floods and other natural catastrophes that make the state an inherently risky market for insurance providers.

“Natural catastrophes have impacted Florida and the United States the last five years to the tune of $600 billion,” said Connor Lynch, CEO of Palm Beach-based Plastridge Insurance. Since 1980, Florida has seen 25 tropical cyclones, 18 severe storms, five freezes, four wildfires, seven droughts, two floods and five winter storms that resulted in billions of dollars in damages. Litigation provides another risk: between 2013 and 2020 Florida’s property insurers paid out over $15 billion in claims costs, according to data from the FAIAopens PDF file .

The inherent risk and high cost to insurance providers has resulted in rising premiums, further complicated by global factors and instability insurers have encountered in the secondary, business-to-business (B2B) reinsurance market — a global exchange in which insurers mitigate potential losses by having segments of retail insurance policies re–insured by other dedicated insurance providers. Spreading the risk lowers costs that translate to savings to the end consumer. However, Lynch said that the years-long trend of natural catastrophes has adversely impacted the reinsurance market, depleting funds and making insurance as a whole more costly.

“In 2021 alone there were more than 12 storms that made landfall in the United States, not to mention floods, wildfires, the ice storm last winter in Texas as well as tornadoes. We’ve now had several years in a row with this type of negative trend and impact on the insurance industry,” Lynch said. “Because many insurance companies and reinsurers lost significant money over the past several years, these costs eventually trickle down and impact us all as consumers.”

The combination of global instability and Florida’s unique risks has seen some insurance providers liquidate or remove themselves from the market entirely to avoid the same fate.  South Florida in particular continues to see rising premiums in the wake of the Surfside condominium collapse last year, which highlighted the wear-and-tear on coastal builds, particularly older buildings.

A useful barometer for how dire Florida’s insurance market has become, and how particular it is, is the state-funded and backed Citizens Property Insurance Company. Known simply as Citizens, the state insurance company acts as a last resort for those who cannot find coverage.  Since the end of 2019, Citizens has grown from approximately 450,000 policies to about 800,000 policies by the end of 2021, with an estimated growth of 7,000 new policies a week, noted Brendan Lynch, brother to Connor and president of Plastridge Insurance in a conversation with Palm Beach radio host Penny Pompei. Due to its last-resort status, per Florida statute,  agents are unable to take out a policy for clients until they’ve demonstrated they’ve gone to the general market prior to enrolling with Citizens. That a state-backed insurer has almost doubled in size in the span of two years demonstrates, as Lynch states, that “when Citizens grows, we’re in a bit of a bad market, unfortunately.”

A reduction in property insurance costs can be achieved by making the property as attractive to insurance providers as possible. “The best way to keep pricing down is to make your property as attractive as possible to as many companies as possible. This means having newer roofs, opening protection on all openings, the whole works,” says Connor Lynch. Reviewing specific coverage provides another avenue for managing costs and avoiding unexpected bills, and a qualified team that understands the market is a surefire way to help navigate ever-increasing expenses. “Carriers have changed what they are willing to cover for claims. Many have begun adding limitations or even insuring the roof coverage with depreciation, which can provide significantly less coverage at the time of a claim. Not everyone understands how the Florida insurance industry has changed over the years but we’ve been here since 1919 and seen everything from hurricanes and tornadoes to floods and frosts, and we’ve weathered those together as a team. We have worked on all types of homes in typical residential neighborhoods and we have insured some of the largest homes on the ocean. We also insure many business and large commercial properties as well as condominium associations.”

Finally, costs won’t settle until an equilibrium is reached and that requires better preparation for severe weather events. The state must also address the long-standing fraud that has made Florida infamous, Lynch said. “The more we do in Florida to protect our properties means insurance companies will likely end up paying less in claims. In order for costs to stop skyrocketing, we believe the companies will need pricing to get to an adequate place and, as a state, we will need to crack down on the fraud and some of the legal issues that are driving up the overall costs of claims.”