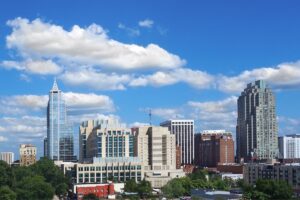 2 min read April 2022 — The Triangle region is booming, with a population that has grown by 25% in just 10 years, but while the boom has proven lucrative for some, it is costly for the area’s most vulnerable as housing costs skyrocket and affordability becomes a top concern.

The Raleigh housing market is one of the leading in the country, according to Norada Real Estate Investments. “Raleigh’s real estate market is already scorching, with prices at record highs, but they are set to soar even further in 2022, with the Raleigh market expected to be the third hottest in the United States this year,” the firm noted in its 2022 forecast.

Local factors further influencing the competitive housing market — in addition to the national trend creating a seller’s market, such as low interest rates and increased flexibility with remote work — is that a high number of Raleigh-Durham residents boast credit scores of over 700 and the ability to pay 20% or more for a down payment. Additionally, the high rate of growth — about 63 people move to the Triangle every day — makes it impossible for builders to keep pace with demand. The increased competitiveness among homebuyers has also increased rental rates, Norada reports, with rates jumping by 11.2% year-over-year as of January 2022.

Between 2011-2021, home prices in Raleigh increased an average of 8.5% annually, a report by the National Association of Realtors showsopens PDF file . That places Raleigh 16th in the country for the percentage increase in home values in the last decade, out of 900 metropolitan areas studied. The median price of a home in Raleigh in the fourth quarter of 2011 was $185,300.

Last year, Mary-Ann Baldwin, mayor of Raleigh, told Invest: that affordable housing is her top priority. The city has a 10-point plan to address the issue, including the City Council voting to approve “granny flats” or accessory dwelling units to be built for aging parents or renters and a rezoning change to create more “missing middle housing.”

“You cannot build a townhome in 80 percent of our city and townhomes are usually somebody’s entry into homeownership. We want to make it easier to build townhomes, duplexes, triplexes and quads as well as single-family homes. That’s the way housing was built before the 1950s and it allows for more affordability and housing choice,” Baldwin said.

Raleigh voters also approved in a 2020 vote — with 72% of voters — a Housing Affordability Bond that will raise capital to preserve and create affordable housing opportunities within Raleigh, partnering with area nonprofits.

Housing affordability is all about community planning, said John Byrne, mayor of the town of Fuquay-Varina. “Housing affordability comes right out of our land-use plan. The town has spent quite a bit over the last five to 10 years on modernizing our land-use plan. It promotes affordability because it encourages a variety of housing stock in our community,” Byrne told Invest: in an interview last year. “In the last five years, a good amount of new multifamily development has occurred along our major highways. We’ve tried to promote and encourage Downtown living opportunities.”

Projects moving forward include a 20-townhome community planned by builders Concept 8 and Chappell, with prices expected to start in the mid-$400,000s, according to the Triangle Business Journal.

As the Triangle area is projecting continued growth, housing affordability will remain a top priority for community leaders and residents.