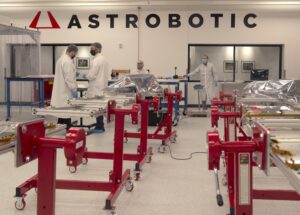 2 min read April 2022 — From the Wright Brothers to the first moon landing, Pittsburgh has had a significant impact on the aerospace industry. But with the enormous potential of the space industry, Pittsburgh’s greatest contributions are yet to come.

“Space is a $447 billion industry worldwide, and less than 20% of that is government spending. Most people think of NASA when they think of space but NASA is a small percentage of the grand scheme,” said CEO of Astrobotic John Thornton for Invest: Pittsburgh 2022. “There have been multiple projections that the $447 billion will reach $1 trillion by either 2030 or 2040. This is a massively growing sector and Pittsburgh, in particular, is well suited for the robotics and components side of that growth.”

Pittsburgh’s history in the aerospace industry begins with the Wright Brothers, where today’s Pittsburgh-based Alcoa, then The Pittsburgh Reduction Company, supplied aluminum in the creation of the world’s first flying machine. Alcoa’s alloys and propellants have been used in everything from the first moon landing to International Space Station programs.

Today, new players with new purposes are taking the stage. Organizations such as Bloomfield Robotics, Advanced Robotics for Manufacturing (ARM) Institute, Astrobotic and a variety of other space-relevant companies are helping to bolster Pittsburgh’s significance in the growing space industry.

Of course, the money being poured into the space industry will generate further economic potential in the future. Thornton pointed out one example: an asteroid, “trillions of dollars,” orbiting the sun with more metal than mankind has ever mined. Tapping into the vast resources the universe offers is a better alternative than exhausting resources on “our delicate blue planet,” argues Thornton.

The next step for the expansion of the space industry is the moon. NASA has already said its next priority is getting back to the Moon in 2024, this time to stay, as the ultimate goal is to move further into space. 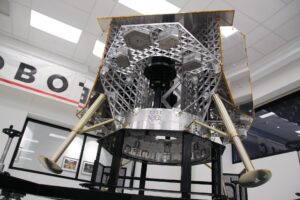 “If we’re ever going to achieve a future of interplanetary travel and settlement, it’s going to start with the moon. We’re going to learn to live off its land, have astronauts operate there, grow food, extract fuel and it all starts with delivery to the moon as well as robotics for surface activities and infrastructure to support those surface activities,” said Thornton.

Astrobotic prides itself on lunar delivery and is helping NASA in its goal to revisit the moon. Astrobotic’s Peregrine lander is due to launch in 2022, poised to carry out the first commercial mission to the moon and be the first American spacecraft to land on the Moon since the Apollo program. NASA awarded $79.5 million for the project. A NASA-built lander may have cost upward of $500 million, according to Science. Griffin is another lunar lander from Astrobotic and set to deliver NASA’s water-hunting VIPER rover to the Moon’s south pole in 2023.

Of course, Astrobotic isn’t the only company in Pittsburgh contributing to the expansion of the space industry. Bloomfield Robotics, for example, is helping to grow plants in space, and MSA Safety is exploring new ways to keep astronauts safe.

At the heart of Pittsburgh’s strength in the space industry is its talent pool, specifically in the area of robotics, and a robust higher-education ecosystem. The Robotics Institute at Carnegie Mellon University, for example, is the largest university-affiliated robotics research group in the world. In addition, according to CBRE’s “2021 Scoring Tech Talentopens PDF file ” report, Pittsburgh ranked as the most diverse tech talent market in the nation.

“We’re a space robotics company, and so we’re looking particularly for space experience in a lot of our roles. We typically draw space talent from the rest of the country. But, on the robotics side, Pittsburgh is robust and vibrant with robotics talent,” Thornton said.