Pittsburgh universities leading the charge towards a greener world

Pittsburgh universities leading the charge towards a greener world 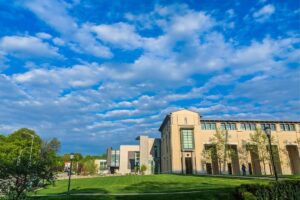 3 min read August 2021 — With one in six deaths annually being attributed to disease-causing pollutionopens PDF file , fostering a greener, more sustainable planet has become a key focus of society. Renowned higher educational institutions in Pittsburgh and the surrounding area, such as the University of Pittsburgh, Carnegie Mellon University, Slippery Rock University, Indiana University of Pennsylvania and others, are leading the charge towards a sustainable future.

With its newest LEED certification building, the Graduate School of Public Health (GSPH), the University of Pittsburgh has developed a total of 1.2 million square feet of LEED-certified space, with more than a dozen green building certifications in the works. For perspective as to the significance of this achievement, in 2004 Pittsburgh was named “America’s Greenest City” with just four LEED-certified projects totaling approximately 2.24 million square feet.

Other universities are also making an immense push towards greener campuses.

Slippery Rock University (SRU) was the first 4-year college in Pennsylvania to be named a Green Ribbon School by the U.S. Department of Education, pushing towards its mission to reduce the university’s greenhouse gas emissions and achieve carbon neutrality by 2037. Indiana University of Pennsylvania (IUP) has also exhibited its commitment to a greener future by obtaining LEED certifications for its residence halls.

The universities alone are not the only driving force of sustainability, as their students are making significant contributions as well.

About 108 billion pounds of food is wasted every year in the United States. A startup by students and graduates of Carnegie Mellon University and the University of Pittsburgh, Ecotone Renewables, has big plans to help reduce the waste of this food. “We’re diverting food waste that would otherwise go into landfill and we’re actually turning that food waste into a liquid fertilizer as well as renewable energy,” said CEO Dylan Lew in an interview with the Pittsburgh Post-Gazette.

At the heart of change is people, and the students of institutions in the Greater Pittsburgh region are dedicating their time, and in some instances their entire careers, to the mission of finding sustainable solutions. “Environmental issues are really involved in every topic that we talk about on the global stage,” said Maegan Bogetti, a student at Carnegie Mellon University. “Sustainability is just the foundation of everything I’m going to be doing for the rest of my life.”

In October of 2020, the University of Pittsburgh ranked 30th in the nation on the largest green power universities list. While Pitt has unfortunately dropped out of the top 30 since, Carnegie Mellon stands at No. 10 as of the most recent report.

The Greater Pittsburgh region has some of the most sustainability-focused universities in the country. Both the universities and students are helping the region achieve its green potential while serving as a model for others.

Photo by Nanda Firdaus on Unsplash