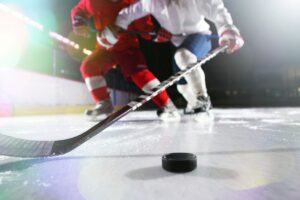 2 min read April 2022 — In efforts to rejuvenate Pittsburgh’s marginalized communities, the Pittsburgh Penguins are among the city’s most notable champions.

The most noteworthy project being pursued by the Penguins is the redevelopment of the former Civic Arena site in Pittsburgh’s Hill District, a grouping of historically African American neighborhoods that was well-known as the cultural center of Black life in the city and a major center of jazz before its economic decline after WWII. The Hill District lost approximately 71%opens PDF file of its population between 1950 and 1990. Since 1990, the Hill District has lost another 34%opens PDF file of its population. From 2010 to 2020, Pittsburgh as a whole lost over 10,000 Black residents.

At the heart of this redevelopment project is the FNB Financial Center, a 26-story mixed-use development with over 475,000 square feet of class-A office space that will position FNB as one of only a few public companies in the United States to establish its headquarters in a predominantly minority community.

“Led by the Penguins, FNB Corporation CEO Vince Delie and Buccini Pollin Group, our development of FNB Financial Center is the largest and most impactful development in the city in over 30 years,” COO and General Counsel of the Pittsburgh Penguins Kevin Acklin told Invest:. “We are exemplifying the highest commitments to social equity and driving a development that is very restorative in rebuilding a historic neighborhood. We are not only creating thousands of jobs and generating economic activity to help the region recover from the pandemic, we are working closely with community partners to increase opportunity for minority workers and make sure the community benefits from the development.”

Construction of the FNB Financial Center is anticipated to be completed in late 2023 and the entire redevelopment of the former Civic Arena site is estimated to cost $1 billion, according to a Penguins media statement. In addition, an investment fund was created that will divert over $50 million of direct investment from the development back into the local neighborhood. A project of this magnitude and impact, located in the heart of downtown, is not a common occurrence. “We have yet to see another development that is as ambitious or restorative, and we are very proud of our collective efforts,” said Acklin.

The Penguins have also been pushing their social equity efforts on the ice. In late 2021, the Penguins opened the Hunt Armory ice rink in Shadyside, Pittsburgh’s first public hockey rink built in almost 25 years, targeting kids in city neighborhoods who don’t have access to suburban rinks or equipment. The rink offers free skating and hockey diversity programs for city residents. Other initiatives, such as the Willie O’Ree Academy, are also serving as a resource to the local Black community.

Of course, the Penguins aren’t the only sports team in Pittsburgh pushing for greater social equity. Annually, the Penguins, Pittsburgh Steelers and Pittsburgh Pirates donate over $15 million combined and provide their time to local charities and causes, according to information provided by the Penguins.