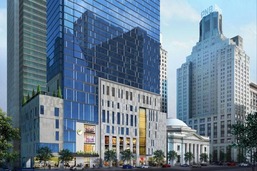 2 min read March 2020 — According to a recent report by the Philadelphia Alliance for Capital and Technologies (PACT) and Pitchbook, Philadelphia’s 2019 venture investment of $2.5 billion puts the city in seventh place nationally as a VC giant. And as more and more funding flows into Philadelphia, venture capital investment shows no sign of slowing down.

The most active investor is Ben Franklin Technology Partners of southeastern Pennsylvania, according to the report, having funded 356 deals. It is a leader in seed capital investments with over $200 million invested over 35 years, launching over 2,000 companies. It is not just volume that counts, but also value. In a record for a Philly-based company, the largest funding round in 2019 was for food delivery service goPuff, which raised $750 million.

But despite this momentum, Philadelphia still has a way to go before it can catch up to VC hubs such as San Francisco, the report says. “Deal size inflation for Philly—though broadly consistent with the YoY persistence of rising valuations across the US—has yet to push median deal sizes to levels reached elsewhere,” the report said. “For example, the median for an early-stage deal in Philadelphia was $3.8 million—roughly half the US median.”

So what are Philadelphia investors doing about it? One lawyer, Ajay Raju, is setting up three new VC funds in the city to capitalize on its success. “There is no shortage of talented founders with great ideas and road maps who are designing the future,” he told the Philadelphia Inquirer. The three companies – 215 Capital, Backswing Ventures and Togo Ventures – will target different investors and aim funds at different sectors.

215 Capital will be an exclusive, subscription-only Series A pledge fund with just 100 investors and a focus on technology, whether in software as a service or real estate technology. Togo Ventures will focus on the pharma industry, from digital health to clinical trials. And Backswing will be “sector agnostic” to bridge the gap for anything in between.

“We are geography-agnostic and return-devout,” Raju told the Inquirer in an interview, but admitted that Philadelphia has plenty of opportunities ripe for investment and entrepreneurs hungry for capital to realize their ideas. “Philly’s innovation ecosystem needs capital and plenty of it,” he said.