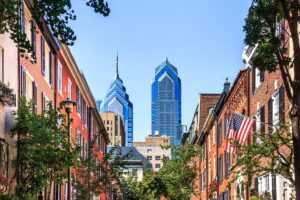 2 min read April 2022 — From the first library to the first hospital, Philadelphia is known for having many U.S. firsts. While Philadelphia is already well-known throughout the U.S. for its historical significance, there are a few things on the horizon that could boost Philadelphia’s international reputation.

In 2018, a joint bid between the United States, Canada and Mexico won hosting rights for the 2026 World Cup. In May, it is anticipated that the 10 U.S. host cities will be announced from the 17 candidate cities under consideration. Among these potential host cities is Philadelphia, which has been recognized for its passion, rich history and unity. Philadelphia being chosen as a host city would no doubt bring greater international attention to the city, with more than half the world, over 3.5 billion people, having watched the 2018 World Cup.

Also in 2026 will be Philadelphia’s hosting of the 250th anniversary of U.S. independence, known as Philadelphia250. The event is fitting as the Declaration of Independence was signed at the Pennsylvania State House. While there are no concrete numbers as to what the economic or international visibility impact will be, many local leaders have shared with Invest: their excitement for the event. “The efforts are well underway and now is a good time to be thinking about how your organization will engage,” said Executive Director of the Global Philadelphia Association Zabeth Teelucksingh.

With Invest:, Teelucksingh shared a few other significant events and initiatives on the horizon, one of those being a pending World Heritage designation. “Pennsylvania is set to get its third World Heritage City in Bethlehem, which is like the Vatican for Moravians and has a great deal of historical importance. By flying into Philadelphia, you’ll now have access to two World Heritage sites, and with Pittsburgh included we have more in Pennsylvania than any other state in the country,” said Teelucksingh. “Getting a World Heritage designation is like winning the Super Bowl of culture. It is very significant internationally.”

There has been a push for fostering a more sustainable society worldwide, and shining a light on Philadelphia’s alignment with the U.N.’s 17 sustainable development goals could prove beneficial in highlighting the city, according to Teelucksingh. Global Philadelphia is helping to draw attention to this through a public art awareness project, the first of its kind for any city in the world, which involves collaboration between sponsors and artists to create works of art in the city that represent the sustainable development goal the sponsor has chosen. Institutions such as Temple University and St. Joseph’s University took part in the three that were released in 2021. For 2022, more are on the way. “We have six more coming up this year and will be very busy with this awareness raising project. In the space of corporate ESG, it is a great way of showcasing that you are paying attention and are involved,” said Teelucksingh.

There are a variety of events and initiatives highlighting Philadelphia as a place of international significance, but the initial next step is simply restarting travel. “American Airlines is now restarting a whole slew of flights to major cities across Europe, and that really matters in terms of global positioning,” said Teelucksingh.