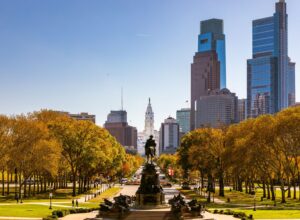 4 min read October 2022 — While Philadelphia’s tourism sector continues on its road to recovery, the region has a full itinerary of events and development over the coming years that will drive the local economy forward, establishing it as a global event destination.

The city’s stakeholders, from local government to private sector investors and developers, have worked in conjunction to ensure Philadelphia’s global status on the map, securing key victories that will continue to make the city a place to visit and ensure residents have their fair share of fun. The city will draw global attention in 2026 when it plays host to the FIFA World Cup, but until then, a number of other big-ticket items, from the World Series and WrestleMania 40 to huge investments in redevelopment, means the city’s momentum, which picked up even before the pandemic, will continue uninterrupted for the foreseeable future.

“Philadelphia is gaining a reputation for being a great place to host events and other big gatherings. In the past decade, Philadelphia has hosted some of the biggest events possible, such as the Republican and Democratic national conventions, the World Meeting of Families and Papal visit, the NFL Draft and many other world-class events and conventions,” Gregg Caren, president and CEO of the Philadelphia Convention and Visitors Bureau, told Invest: Philadelphia 2022. He explained, “The city is uniquely positioned in the densest part of the country, attracting visitors for leisure travel, as well as for conventions and trade shows.”

While the World Series will no doubt provide a high-point to a year marked by a steady and growing recovery across the region’s tourism and hospitality sectors – and with baseball fans looking forward to the 2026 MLB All-Star game, Philadelphia can expect a busy schedule of games and conventions over the next few years, including the 123rd Army-Navy football game at Lincoln Financial Field this December and NCAA Division I, II and III championships for Men’s Lacrosse and Women’s Rowing, hosted at Lincoln Financial Field and Camden County’s Cooper River, respectively. Between March and April, the Pennsylvania Convention Center will be hosting the girls junior volleyball National Qualifier, and the U.S. Open Squash Championships will be held at the Arlen Specter U.S. Squash Center over the course of several months. And that’s all just in 2023.

Following a busy 2023, 2024 will see its high water-mark with the return of WrestleMania 40, with the City of Brotherly Love hosting the smackdown, as well as a number of related events, at Lincoln Financial Field, Wells Fargo Center and the Pennsylvania Convention Center. “We are proud to welcome WWE fans from around the world to Philadelphia to be a part of the historic 40th WrestleMania in 2024,” said Philadelphia Mayor Jim Kenney in a press release. “The week-long series of events will help put a global spotlight on our great city while also generating a major impact for our local economy.”

WrestleMania acts as an economic engine in its own right, having generated over $1.25 billion in cumulative impact for the cities that have hosted the event. This past April alone saw a record $206.5 million generated over the course of a weekend for the Dallas-Arlington region, with Caren noting that WrestleMania fans and Philadelphia’s sports passion make for a potent mix. “The combination of Philadelphia’s passionate fans joining forces with WWE’s worldwide fan base will create an incredible electricity throughout the city for the events at Lincoln Financial Field, Wells Fargo Center and the Pennsylvania Convention Center.”

Throughout the ongoing catalog of events, Philadelphia’s transformation into an “eds and meds” hub will continue apace, with a number of developments meant to anchor the city’s status as a global life sciences, research and education center coming online and providing additional conference and event space. “Education and medicine, or ‘eds and meds,’ are two of our biggest sectors when targeting industry business travel. Philadelphia has an extraordinary life sciences community in University City, on the west side of the city. We have biotech, cryo and other life science sectors that see the opportunity for growth here,” explained PHLCVB’s Caren to Invest:.

The developments include the multiple billions of dollars worth of investment and millions of square feet of space, with projects such as the $3.5 billion Schuylkill Yards that will connect Philadelphia International Airport to other major cities along the Northeast Corridor, or the Navy Yard’s redevelopment to provide 8.9 million square feet of new life science, commercial, residential, retail and mixed-use development. By the end of this year, Philadelphia will also see the completion of Wexford’s One uCity Square, with the 13-story tower hosting a mix of office, lab and retail spaces, as well as a two-story penthouse, totaling approximately 400,000 square feet and further bolstering Philadelphia’s deepening bench of research, conference and education space.

While these efforts are underway, the PHLCVB has taken steps to ensure the communities most impacted by development and event programming also benefit from the anticipated economic windfalls. Sheila Alexander-Reid was appointed executive director of PHL Diversity, a key business development division of the PHLCVB, in August, with the aim of increasing the net convention, meetings and tourism brand value of Philadelphia while further developing the synergies between industry and government stakeholders across Philadelphia’s diverse communities. PHL Diversity is itself charged with promoting the area as an ethnically diverse visitor destination while promoting multicultural business investment across the region.

“I look forward to continuing my career of advocating for diversity, equity and inclusion and progress in the great city of Philadelphia by leading PHL Diversity,” said Alexander-Reid. “And I look forward to continuing to support the mission of the PHLCVB and PHL Diversity and cannot wait to work with its well-established board and close partners in the city and beyond.”

By the time the World Cup and its half-a-billion economic impact scores in 2026, Philadelphia’s recovery will be beyond complete — the city will be a premier destination and event hub for sports, research and education, while ensuring that all of its residents have the opportunity to partake in the economic growth underway. Between the coordinated efforts of the PHLCVB in various aspects of the developments underway in addition to the event itinerary laid out over the next four years, Philadelphia will be a global city ready to play before a global audience. Caren told Invest:, he was bullish for the future, and anticipated a full recovery well before the World Cup begins. “Based on how things are trending, we expect our numbers to return to pre-pandemic levels sometime in 2024, or maybe even late 2023. Our mission is to keep trying to accelerate that return to pre-pandemic attendance,” he said.