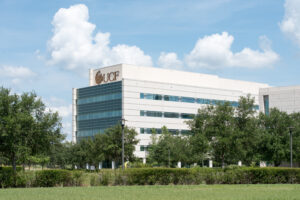 2 min read June 2021 —  From its recognition as one of the top patent-producing public institutions nationally and globally to being the recipient of a “transformational investment,”  it was an exciting week for the University of Central Florida.

A new report released Wednesday highlighted UCF’s penchant for producing patents, ranking it 25th in the nation among public universities and 60 in the world. That same day,  the institution announced author and philanthropist MacKenzie Scott made a $40 million unrestricted gift to the university slated to strengthen social mobility and skilled talent development strategies. In what was called a “transformative investment,” the gift was the largest donation made to UCF in its 58-year history, the school reported.

With 46 recognized patents, UCF edged out institutions such as Carnegie Mellon, Texas A&M and Penn State in the rankings, according to this year’s National Academy of Inventors and the Intellectual Property Owners Association annual university patent-holders report.

“Patents are one measure of our growth and impact,” Vice President of Research Elizabeth Klonoff said in a press release. “We are strategic about selecting the inventions for patent protection to ensure fiscal responsibility and to maximize the potential of receiving valuable patents. Steady growth of UCF’s research base, inventions, patents and industry licensing partnerships feed our economic ecosystem, which brings not only financial benefit to UCF but also solidifies our place as a top-tier research institution. Doing our part means we benefit the local community and society at large by contributing to technological advancements that improve people’s lives and drive the economy.”

Some of the 46 patents secured in 2020 have been licensed to companies, the university reported. The companies are then tasked to invest in taking the products to market, which in turn means more jobs and often investing in facilities. All this impacts the economy, the university said.

“Patents themselves do not generate revenue,” Klonoff said. “Licensing patents to industry partners to facilitate transformation of promising research results in valuable products that bring true benefit to the university and society.”

Scott’s $40 million donation to the university is slated to boost transformation efforts across the board. UCF was one of 286 organizations that benefited from a philanthropic effort that totaled nearly $3 billion. In Florida, UCF was one of three educational institutions that made Scott’s latest round of donations. Florida International Institution in Miami and Broward College in Broward County also received sizable donations.

“This unrestricted investment will accelerate our trajectory toward becoming the world’s leading public metropolitan research university and inspire others to invest in building a better future for our students and society,” UCF President Alexander Cartwright said in a statement.

The $40 million investment is slated to fund new programs geared toward student success, providing faculty funds to conduct groundbreaking scholarship and research, and amplifying the impact of established and future partnerships, the university reported.