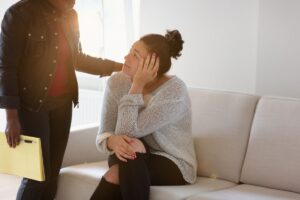 2 min read May 2022 — Following the release of a poll opens PDF file showing a rise in mental health issues in New Jersey, Stockton University will hold a panel discussion to address related issues and questions in the state.

The study, published at the end of April, found that mental health has deteriorated for 68% of New Jersey residents. A determining factor in the mental health of residents of the region was the pandemic.

“Our poll in April highlighted the toll COVID-19 has taken on the mental health of New Jersey residents of all ages, related not just to health issues, but also education, employment and housing,” said John Froonjian, executive director of the William J. Hughes Center for Public Policy at Stockton University, in an email response. “It also indicated that residents believe more services are needed.”

Many studies on a national and global scale have indicated the pandemic had a detrimental effect on people’s mental health. In March, the World Health Organization released a scientific brief that confirmed that “in the first year of the COVID-19 pandemic, the global prevalence of anxiety and depression increased by a massive 25%.” The William J. Hughes Center for Public Policy at Stockton University conducted its own research and found similar numbers for the region of New Jersey.

Another standout from the Stockton survey was the high percentage — 58% — of respondents who said they, or someone they know, has experienced mental health issues.

Young people are at particular risk. According to the scientific brief released by the WHO, “the pandemic has affected young people’s mental health and that they are disproportionally at risk of suicidal and self-harming behaviors. It also indicates that women have been more severely impacted than men.”

To address the issues highlighted in the Stockton poll, Froonjian told Invest: that a discussion among public and private leaders in South Jersey was necessary going forward, particularly in regard to young people’s mental health issues. The university has organized a panel in May to jumpstart the dialogue.

“In an effort to continue the conversation, the Hughes Center is partnering with the Atlantic County Council of Education Associations and The Kennedy Forum to present a panel discussion on youth mental health services,” Froonjian told Invest:.