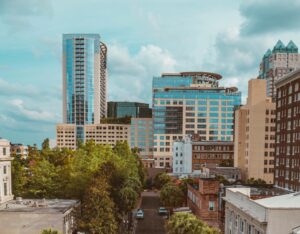 2 min read April 2021 — It’s been a difficult cycle for Orlando’s multifamily market as the sector recorded year-over-year rent decline for the month of March. Median rents in metro Orlando fell by 1.1% to $1,345 in March compared to the same period last year, according to a new Realtor.com report tracking national rental data across the 50 largest metropolitan areas.

The South Florida rental market, grouped as Miami, Fort Lauderdale and Palm Beach, trailed Orlando, with a median rent decline of 0.7% year-over-year to $1,886.

Though Orlando has made strides in diversifying its economy away from its travel and tourism penchant, COVID-19’s decimation of those sectors has badly battered Orlando’s local economy. Unemployment rates skyrocketed to 21.1% last May, according to the St. Louis Federal Reserve. Mirroring national trends, Orlando unemployment rates have stabilized a year into the pandemic and currently stand at 6.5%, still slightly higher than the national average of 6%.

Lower transaction volumes characterized activity in the multifamily market in 2020 even as construction kept going for thousands of units. According to Yardi Matrix, approximately $63 million in multifamily assets traded in 2020, compared to 2019’s $176 million. Construction continued, however, banking on the long-term future of the region. New construction deliveries soared in 2020 as 7,558 rental units were finalized throughout the Orlando market, according to Marcus and Millichap’s 1Q21 multifamily report. Close to 17,500 apartments are under construction that should go well into 2023, with an expected 10,000 units expected to be delivered this year, the brokerage reported.

Florida’s fundamentals, mainly population growth and affordability, are set to fuel the market’s road to recovery. “Orlando’s population grew by 61,000 residents, which outpaced fast-growing metropolitan areas like Atlanta; Austin, Texas, and Tampa,” Lloyd Jones CEO and Chairman Chris Finlay told Multi-Housing News. “Although we feel Central Florida has been immensely impacted by COVID-19, we are strong believers that once we are past this pandemic, Orlando will boom. A driving force behind Orlando’s growth includes the rise in success of the healthcare, finance, technology and engineering sectors present in the market. Most people do not realize the diversity of industries and jobs in the Central Florida area,” Finlay told the news outlet.

The vaccine distribution efforts help clarify the economic picture for the market. Still, industry leaders expect the road to recovery to be fraught with pandemic-related challenges. Yardi Matrix forecasts a rental improvement of 1.5% this year, the research company outlines in its 2021 Multifamily Orlando Report. Finlay similarly expects a repeat of 2020. “In 2021, we expect to see low transaction volume as in 2020. However, in 2022 and beyond we anticipate substantial growth in demand and performance throughout the market. As a result, there will be increased transaction volume,” he told Multi-Housing News.