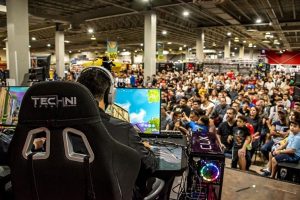 2 min read February 2020 — IBM developed the first PC in Boca Raton and now the city is making a new effort to bring back the gamers. In 2021, Misfits Gaming Group will consolidate its North American presence with a new, $1.35-million, 18,000-square-foot headquarters in Boca Raton, Florida.

The Misfits organization owns teams that compete in League of Legends, CounterStrike: Global Offensive, Overwatch, Hearthstone: Heroes of Warcraft and Super Smash Bros. Founded in 2016, Forbes estimates the company’s value at $120 million and global esports revenues are estimated at $1.1 billion in 2019.

The Misfits Gaming Group will set up two Florida-based franchised esports teams, the Florida Mayhem and Florida Mutineers, through which it will run several large-scale esports events throughout the year, in addition to college tournaments and community events. These events can rake in millions, with eye-watering prize money. The winners of the Dota 2 esports tournament walked away with over $3 million each, as did the 2019 winners of the Fortnite World Cup. In comparison, the 2019 winners of Wimbledon, Novak Djokovic and Simona Halep, took home $2.9 million each.

One of the reasons Misfits chose Boca Raton for its new HQ is the business-friendly environment Florida provides – not to mention the generous tax breaks provided by the authorities. Local and state authorities will provide over $200,000 in grants and tax refunds in exchange for creating 30 new jobs with average salaries of $95,000.

“[Misfits] falls within a targeted industry sector for not only our county efforts, but state efforts as well,” said Kelly Smallridge, president and CEO of the Palm Beach County Business Development Board in an interview with Esport Observer. “Also, the fact that the jobs are high paid, much higher than the average of the county, which is $53,000.”

Florida is a surprisingly logical state in which to expand an esports empire. According to Enterprise Florida, the state has the nation’s third-largest tech industry and is a leader in high-tech employment, ranking No. 1 in the Southeast. Florida’s universities are one of the region’s largest producers of STEM graduates – in fact it is one of the largest generators of graduates entirely. And West Palm Beach has one of the highest concentrations of IT employees in the state.

The state is also a pioneer in connectivity, essential for any industry built around fast internet connections. The state has 61,000 total fiber miles, the third-most extensive statewide network in the United States. It also has 275 data center locations, the fourth-highest density among all U.S. states.

Misfits certainly sees this potential in Florida, and in November launched a $10 million esports and gaming incubator and seed fund. “As the first esports and gaming-focused startup incubator and seed fund offering the resources of our caliber in North America, our goal is to create infrastructure for supporting and developing emerging business talent,” said Ben Spoont, CEO and Co-Founder of Misfits Gaming Group in a press release. “We want to help invest in the kind of ideas that will move our industry forward.”