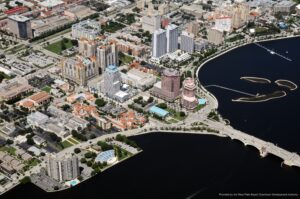 2 min read March 2021 — Palm Beach’s newest high-profile resident is the fashion icon Tommy Hilfiger, who just paid $9 million for a new house in the North End after less than two months on the market.

Hilfiger’s move is another in a series of relocations from notable businesses and individuals that has seen South Florida continue to grow, attracting talent, tech and titans to the region.

The trend is not without its detractors, as some say it is too soon to consider the multitude of firms ⁠— both startup and institutional ⁠— that have expanded their presence in the region as a permanent arrangement. Once the pandemic subsides fully, all will return to what it once was, they believe.

The Palm Beach real estate market tells a different story, as do private-school enrollments.  Inventory of for-sale listings are flying off the shelf while private schools are struggling to process the number of new admissions. The average sale price of single-family residences is $845,677, and while the numbers sold overall has decreased by a small 1.8%, the sales price is a 38.9% increase from this time just last year.

“The market is hot, it’s on fire,” Linda Gary, owner of Linda A. Gary Real Estate and a resident of Palm Beach, told the Palm Beach Post. “We’ve never seen it like this.”

While the average price may be in the hundreds of thousands, it is not uncommon to see them sold for multiple millions. A new mansion along the Intracoastal Waterway in Palm Beach sold for $23.67 million just two months after its last trade. Another once owned by the late Mayor John Shepherd was sold by developer Todd Michael Glaser and his wife, Kim Glaser, for just over $27 million.

As more investors and business professionals snap up whatever property they can get their hands on, one of the most often-asked questions ⁠— and a clue as to whether the move is long-term ⁠— is where a family might be able to enroll their children in a private school. While public schools across Florida have seen declining admissions rates, private schools don’t seem to have enough space to accommodate new residents.

“The pandemic has been a silver lining for us,” he told the South Florida Business Journal. “It has been transformational for our school …. We were not full before the pandemic, and we are certainly full now.”

Admission rates are high, housing inventory is low, and demand continues unabated. Whether people moved to South Florida temporarily now seems to be a moot point, as more of them seem intent on putting down roots, sending their children to school, and working from home or in one of the many new offices that have relocated to the region.