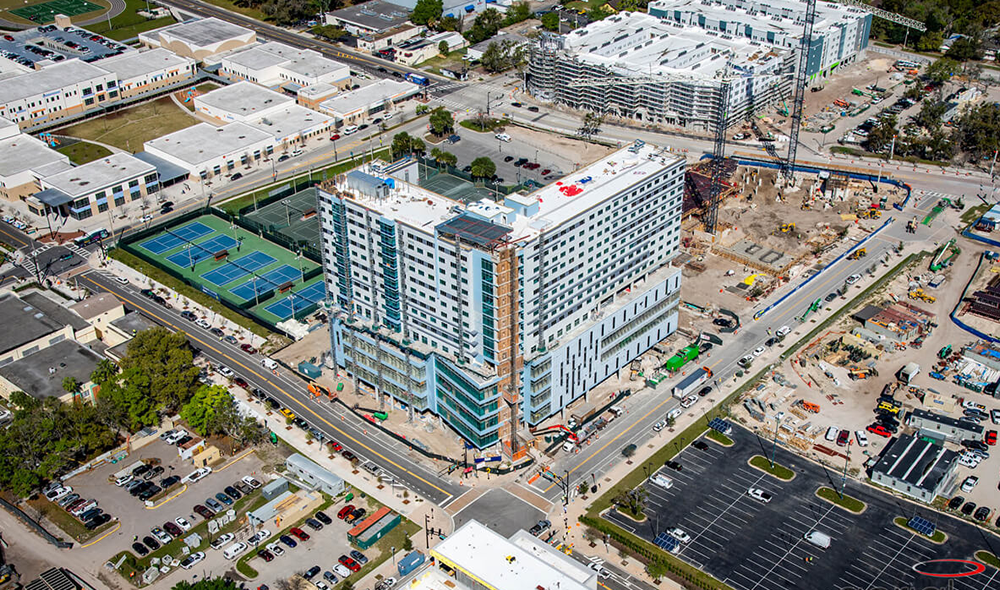 2 min read July 2019 — Right now, students all over the world are enjoying a long summer break. But when summer ends in the fall, 7,700 UCF and Valencia College students will be returning to classes at a new state-of-the-art 68-acre development called Creative Village.

The centerpiece of the campus will be the Dr. Phillips Academic Commons, designed by architects Robert AM Stern and SchenkelSchultz. UK-based contractor Skanska is responsible for the development of the $66 million building. The 580-space, four-story, $14.6 million parking garage will be installed with license plate recognition technology and electric charging stations. State-of-the-art student accommodation will be provided by Ustler Development and DEVEN in the form of UnionWest, a 15-story building with over 600 beds and retail spaces.

The new campus has been in the works for the last four years but it is not just students who should be interested in the development. For local companies, the business of education can be a lucrative one. Not only will Creative Village host the campus, but it will eventually become a massive mixed-use district with 1.2 million office spaces, 1,500 residential units and 225 hotel rooms.

According to the Assistant Vice President of the new campus, Mike Kilbride, the goal was to offer students integration, convenience and walkability. “You go to the legal studies example and we’re just a five-, six-minute walk to the courthouse. So, students have the opportunity to intern while they’re in their courses,” he told Click Orlando.

Sunrail and Lynx buses have established a partnership with the campus, allowing students and staff to ride free of charge. “That allows students with their student IDs to ride Lynx buses for free, so there’s a lot of great options for our students and faculty and staff to connect with this campus if they want to leave their car at home,” Kilbride said.

As the campus becomes more walkable, the need for convenient retail outlets becomes more pressing. According to Wells Fargo research, the average spend of students per year on basics like accommodation, books, transport, clothes and food comes to around $14,960. When considering the students alone, that’s a $150-million gold mine for local vendors just waiting to be tapped into.

Just last week, UCF Downtown announced sushi restaurant Vera Asian would be joining the ranks of Dunkin’, Qdoba, Subway and many more as vendors at the campus. The development will also generate jobs for hundreds more custodial workers, security guards, maintenance workers, IT support workers and others.

“It’s terribly exciting to have 7,000 students in our downtown. That’s going to change the complexion of downtown forever for the better,” Orlando Mayor Buddy Dyer told News 6.