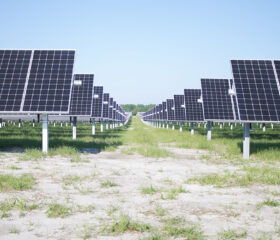 2 min read January 2021 — With the world pumping out 33 gigatonnes of energy-related CO2 emissions in 2019, equivalent in weight to 200 million 165-ton blue whales, Orlando is actively working to do its part and become more environmentally friendly. That means clean energy, and both the private and public sectors are betting on the sun.

The Orlando Utilities Commission (OUC) outlined in October its plans to eliminate the use of coal by 2027 and achieve net-zero CO2 emissions by 2050, using solar as the main source of new energy.  The OUC is not alone in its bet on solar. A number of private sector organizations are also following a similar path.

On Jan. 13, Avalon Park Group announced its plans to build an enormous 300+ megawatt (MW) solar farm in southwest Volusia County, which would have the ability to power over 60,000 homes based on FPL comparisons. “Utilizing the abundant natural resource of the Sunshine State allows us to create a photovoltaic farm at a scale that will not only support the sustainability of the Avalon Park Daytona Beach Community, but also provides a renewable energy source for the entire region to utilize,” said CEO Beat Kahli.

On the power delivery side of the equation, Florida Power & Light Company (FPL) on Dec. 31, 2020, officially closed its last coal-fired plant in Florida. One of the main technologies FPL is utilizing to replace its environmentally unfriendly energy is solar. In the Orlando region alone, FPL is in the process of constructing two 74.5 MW solar farms, specifically in Brevard County, which would have the ability to power approximately 30,000 homes. Each solar farm costs about $100 million to build, according to FPL spokeswoman Alys Daly in an interview with TC Palm.

Florida Municipal Power Agency (FMPA) has also been constructing solar farms in the Orlando area. Through the Florida Municipal Solar Project, a partnership between the Florida Municipal Power Agency (FMPA) and 16 Florida public power utilities, St. Cloud in Osceola County and Orange County both had a 74.5 MW solar farm become operational in June 2020. Clint Bullock, General Manager and CEO of OUC, stated in response to these solar farm openings: “We are on our way to becoming a leading solar energy provider on a watts-per-customer basis in Florida. In a few years, we will reach that goal as we expand our solar generation capacity. A cleaner, greener energy future begins here.”

Efforts to create a green economy through solar have been noticed nationally. The Southern Alliance for Clean Energy (SACE) awardedopens PDF file OUC the “SunRiser” designation for being a leading solar energy provider in the Southeast, in terms of forecasted watts per customer, for the second consecutive year in 2020.

The activity in the Orlando region is helping to boost Florida’s presence as a solar-leader. Based on Solar Energy Industries Association’s (SEIA) latest report, Florida was ranked second, behind Texas, for state solar PV installations as of 3Q20, with a whopping 2,040 MW of photovoltaic capacity installed. In other words, Florida is the second-fastest-growing market for solar, and the Orlando region plays a vital role in this continuing growth.

Overall, however, Orlando still has some work to do. According to the 2020 City Clean Energy Scorecard by the American Council for an Energy Efficient Economy (ACEEE), Orlando dropped from rank 15 to 21, with the Scorecard measuring cities’ efforts to achieve a clean energy future. If Orlando wants to lead the nation in clean energy efforts, the region will have to expand its efforts further. And of course, phasing out fossil fuels is no easy task. Each city that is pushing for a cleaner future will undoubtedly face difficult, demanding challenges.