Orlando development boom unlikely to slow in the short-term

Orlando development boom unlikely to slow in the short-term 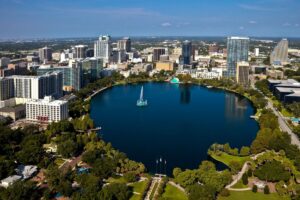 2 min read August 2021 — With tourism accounting for almost 19% of its overall GDP, Orlando was impacted more than most cities by the COVID-19 pandemic. And after a tough year, there are finally signs of a robust economic recovery as Orlando has been quickly acting to take advantage of the revenue opportunities up for grabs.

One sign that economic momentum is returning to Orlando is Marriott’s decision to press ahead with construction of its new 300,000-square-foot headquarters near Palm Parkway and Daryl Carter Boulevard this month. With 1,500 employees slated to work from the building, the group will become Orlando’s third-largest tenant.

But Orlando is much more than just tourism, and there are plenty of residential and mixed-use projects in the pipeline too. In 2Q21, Orlando saw 2,600 new apartment units come to the market and net absorption was at an impressive 4,900 units, according to CBRE.

The figures show that the rate of completions is picking up, given that for the year ending 2Q21, there were 7,800 total completions – putting the most recent quarterly figures above the average. Likewise, the net absorption during the second quarter alone accounted for almost half all net absorption over the four quarters. In fact, during the first half of 2021, Orlando was the 11th leading metro area for multifamily investment, attracting $2.16 billion, a 51.1% pickup over the same period in the previous year.

Recently, Orlando saw one downtown site trade for about $11 million, bought by Northland Thornton Park LLC. After plans for a multifamily development at the site fell flat in the late 2000s, the firm now has plans to move ahead with a 160-room hotel, 400 residential units, 15,000-square-feet of commercial space and 460 parking spaces across 30 stories, according to reports. And in the same month, a 14.8-acre site in Lake Mary was bought by Crescent Communities, which plans to construct a 325-unit luxury apartment complex on the site. The development will include 13,900-square-feet of retail space and 29,500-square-feet of office and commercial space, the developers have said.

But it’s not just residential development that is picking up. One of the city’s largest construction projects is the five-story medical office building and a multistory parking garage being built by Upshot Capital Advisors with a construction cost of $19.2 million. Construction on the proposed $70 million, 165,000 square foot building will begin before the end of 2021 and is expected to complete in 2022.

Colleges are also resuming capital investments, with Beacon College planning a new two-story, 28,000-square-foot campus in Lake County, at a cost of about $8 million.

With the ongoing demand for e-commerce, it is no surprise that industrial real estate is also in high demand. This month, development firm 1335 W. Washington Street purchased a 50,000 square foot industrial parcel for about $60 per square foot. Industrial has had its strongest year on record, with smaller spaces of up to 15,000-square-feet proving almost impossible for developers to find. According to Cushman and Wakefield, there is about 1.5 million square feet of speculative warehouse and distribution space under construction. Rents have climbed too, with some areas such as Orlando Central Park demanding $8.72 per square foot, a 31% year over year jump.

The surge in development is unlikely to slow down any time soon, especially with a resurgence in tourism and companies arriving and expanding in the city. Recently, The Walt Disney Company announced it would move 2,000 jobs from California to the Lake Nona neighborhood. The company will invest $864 million in a new campus to be built over the next 18 months. With significant company moves like this, demand is only likely to get higher and is sure to keep developers busy in the medium term.