Orlando Cashes in on the Experience Economy

Orlando Cashes in on the Experience Economy 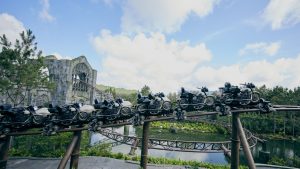 June 2019 — When it comes to spending their hard-earned cash, people prioritize the experience. In a study conducted in the UK, just over 40% of respondents valued how their holiday will appear to their friends and families as the most important factor when choosing their destination. When it comes to Instagrammability, Orlando leads the pack.

The city’s hospitality and leisure sector has been feeding into the local economy for many years. Leisure and tourism was responsible for 20.1% of job growth in Orlando in December 2018, more than any other sector. But even as real disposable income per capita is growing, people are pickier about where they spend their hard-earned cash. They need the wow factor and that is where the Experience Economy comes in.

Orlando has long been synonymous with Disney. Think Orlando, think Mickey Mouse ears and the Magic Kingdom. But global theme park spending surged by 5% to a record $44.8 billion in 2018 and now everyone wants a piece of that pie.

“Orlando is also considered the No. 1 family destination in the US, if not the world, so right now, this city is kind of like the Super Bowl of our industry, where the big game is,” said Bill Davis, Universal Studios Orlando’s COO said in a media interview with Chief Executive.[CN2]

Universal, well aware of the importance of funnelling money into reimagining what the public really wants, has just launched a new experience in the Wizarding World of Harry Potter – a mind-bending alternative universe. The attraction, Hagrid’s Magical Creatures Motorbike

Adventure, opened on June 13 to huge crowds, 10-hour lineups and an ensemble of the movie franchise’s biggest stars.

“I was here back in 1987 when this was all still snake-filled marshland. And to see what it’s become — Central Florida’s newest destination resort — is just kind of mind-blowing,” said Tom Williams, Chairman and CEO of Universal Parks & Resorts said in a Huffington Post interview. “Orlando is the capital of Harry Potter.”[CN3]

But Hagrid’s Magical Creatures is just one of the upcoming additions to Universal Orlando. Late last year, NBCUniversal CEO Steve Burke pledged that parent company Comcast would invest more money in its theme park business than it spent to acquire NBCUniversal, which came in at a total of $30.1 billion.

With an entire theme park to build, entailing infrastructure, back of house, parking lots, and road expansions needed to support it, it looks like Universal is sticking to its pledge.

The company has deep pockets and isn’t afraid to dig into them, which is good news for its flagship Orlando destination. “We’re not going to stop there,” said Williams. “We’re going to keep going with new hotels and new attractions and give people from around the world lots of great reasons to come visit this destination.”