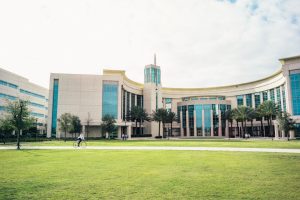 2 min read August 2019 — The global biotechnology market is expected to exceed $775 billion by 2024, according to a new research report by Global Market Insights. With this amount at stake, it is little wonder Orlando is not allowing the opportunity to attract biotechnology companies pass it by.

Florida is the eighth-largest biotechnology R&D state in the United States, with over 260 biotech companies. According to a research paper by Man-Keun Kim and Thomas R. Harris on the clustering effect in the US biotechnology industry, some of the most important factors in forming a cluster include average payroll and overall education level in the region.

Orlando is addressing all these areas to attract biotech giants to the city and surrounding areas.

One example: In 2005, the University of Central Florida (UCF) received a $12.5 million donation from the Tavistock Group to build the UCF College of Medicine at Lake Nona, just south of Orlando Airport. The Orlando community matched the donation, which was in turn matched by a government grant, taking the total investment in the campus to over $100 million.

The new college broke ground in 2007, and the school announced that each of the 41 charter students would be awarded a full $40,000 four-year scholarship. The program attracted 4,300 applicants and the class members had the highest MCAT and GPA scores in the state. The campus continues to expand, now including the medical school’s new 170,000-square-foot medical education facility, as well as its new 198,000-square-foot Burnett Biomedical Sciences building.

UCF has continued to make partnerships with renowned medical organizations to bolster the campus’ facilities. The College of Medicine is now partnered with Sanford-Burnham Medical Research Institute, Veterans Affairs Medical Center and Nemours Children’s Hospital, one of the nation’s largest paediatric health systems.

An economic impact study found that the College of Medicine and Lake Nona’s medical city could create more than 30,000 local jobs, have an economic impact of $7.6 billion and generate nearly $500 million in additional tax revenues for the state.

“I do believe this is a good thing for our community as we endeavor to really diversify our economy with high-wage jobs,” Orange County Mayor Jerry Demings said in an interview with the Orlando Sentinel.

With talent at their fingertips, it is little wonder that leading biotechnology companies are flocking to the city. Most recently, biotech firm Amicus Therapeutics announced Lake Nona to be the frontrunner in a new 18-acre site in which it planned to invest $150 million.

Originally, the company planned to create 300 jobs paying an annual average of $69,670, not including benefits. This prompted the government to offer a sizeable benefits package to tempt the company to settle in the southeast Orlando site.

The government offered a 25% tax break and property tax exemptions over a period of seven years, which would save the company about $1.5 million. Additional state incentives totaled $240,000, with Orlando contributing up to $1,200 per job created. There are additional provisions to increase the tax rebate if the company’s investment exceeds $148.85 million.

“Orlando continues to be one of the sites we are considering, and the availability of tax and other incentives, as well as access to a rich talent pool, are important factors in our ultimate site-selection decision,” company spokeswoman Sara Pellgrino told the Orlando Sentinel.

The company has since changed tack, concentrating more in curative gene therapies, which would limit job numbers. “A gene-therapy facility would require less space and less personnel than a biologic drug-manufacturing plant,” Orange County Economic Development Director Eric Ushkowitz told the Orlando Sentinel. However, under the new proposal, the average salary would rocket to around $100,000.

A formal decision hasn’t been made on whether or not Amicus will have an office in Lake Nona but there are plenty of other biotechnology companies racing for their spot in the scientific hub. Newly-established startups include Aviana Molecular Technologies, which is developing a smartphone-enabled biosensor capable of detecting certain proteins that indicate infectious diseases. Also at the site is SynapCyte, a company that is developing patented technologies to treat Alzheimer’s and Parkinson’s disease through stem cell regeneration.

“This is the place to be if you want to be involved with life sciences,” said the site’s Manager Jim Bowie to life sciences publication BioFlorida.