Orlando a hotspot for game development

Orlando a hotspot for game development 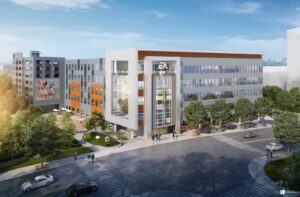 2 min read February 2021 — Cities like Seattle, San Francisco and Los Angeles are well known for their gaming industries. However, you don’t have to go West to find a bustling gaming development community.

Orlando is ranked ninth among all cities in the United States for “gamer & developer opportunities.” The city is home to a variety of innovative gaming companies, as well as UCF’s graduate game design program, which is ranked No. 1 in North America, and its Florida Interactive Entertainment Academy.

One of the large gaming companies located in Orlando is EA Tiburon, which produces Madden NFL, Madden NFL Mobile, NBA LIVE and NBA LIVE Mobile, along with the development of additional intellectual property and internal technology. The company is rapidly expanding.

EA Tiburon is building a 180,000-square-foot, five-story building in the heart of Downtown Orlando at Creative Village, with Creative Village being a $1.5 billion, 68-acre digital media district. The project will cost a total of $62 million to build. “It’s a huge deal because, in and of itself, Electronic Arts is a big deal. It immediately validates Creative Village as being the innovation center of Central Florida,” said Orlando Mayor Buddy Dyer about the project, as reported by the Orlando Sentinel. The studio is anticipated to be completed in October 2021 and it will provide plenty of space for the company to expand and take on new projects, such as EA Sports College Football.

Burnout Game Ventures is another video game company located in the Orlando area. They too are growing. The company is expecting to increase the number of video game projects it supports by 200% in 2021. Other gaming companies in the area, such as Steamroller Studios, have also been experiencing growth throughout the pandemic. Outside companies, such as the multibillion-dollar company Unity Technologies, are also looking to establish a presence in this innovative region. Such companies are looking to take advantage of the area’s exceptional gaming development talent.

Of course, the region also has a strong modeling, simulation, and training (MS&T) industry, which is a larger, similar tech industry. The MS&T industry is a $6 billion industry for Central Florida, working to meet the needs of military and industrial clients. For example, simulations are commonly used in the military to prepare soldiers for situations they will experience in the field. These simulations are becoming increasingly realistic and higher quality. “As user experience becomes more valuable, simulation companies increasingly are hiring talent from gaming studios and adopting practices common in the industry. Game developers possess many of the skills needed for simulations, but with a creative bent. They’re bringing their expertise from gaming, which is making our product better,” said John Cunningham, chief revenue officer for DiSTI Corp., to the Orlando Business Journal.