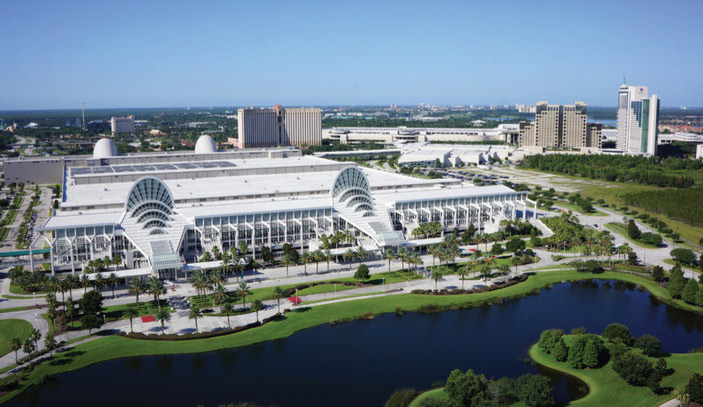 2 min read December 2020 — When life abruptly moved online in March, business travelers were forced to work from home, which had a direct impact on business travel and business events. Orlando’s Orange County Convention Center had to scramble to remain relevant amid an uncertain outlook for the future of the industry.

The first impact for the convention center stemmed from the cancellation and postponement of events. According to the Orange County Convention Center’s website, 67 conventions were canceled and 48 were rescheduled this year due to COVID-19. A blockbuster year lost steam as of March, when shelter in place orders were implemented. The Minecraft Festival was set to be a boon for the center, with expected attendance pegged at 15,000. On March 5, organizers announced they would postpone the event until complications associated with COVID-19 restrictions could be negotiated.

Another event, Ellucian Live 2020, was scheduled to host an event from April 5-8 but canceled. Both events combined were expected to generate $41 million in spending. The Healthcare Information & Management Systems Society’s HIMSS20 Global Health Conference & Exhibition also canceled its show planned for March 9-12, which lost the convention center 44,000 attendees and a $113-million economic impact.

Despite restrictions, some events went ahead as planned. The 47th Amateur Athletic Union Junior National Volleyball Championships were scheduled to take place at the Orange County Convention Center in June, and after being postponed until July, organizers decided to go ahead with the event at the center without spectators. Enhanced safety precautions were taken during the event, which included temperature checks and regulations that the players must wear masks off the court.

But soon the Convention Center found a new use within the COVID-19 landscape: as a testing center. In May, Gov. Ron DeSantis announced the convention center would be used for COVID-19 antibody testing amid rising cases across Florida. Simultaneously, the center pivoted to move its events online. The Global Association for the Attractions Industry intended to host an annual event at the Orange County Convention Center but instead the center hosted a virtual event. According to Orlando Weekly, both the Professional Convention Management Association and the IACC (formerly the International Association of Conference Centers) are planning multisite hybrid events in 2021.

As the year came to a close, the center opened to more events. In December, the 2021-Model Central Florida International Auto Show was on track to take place, with the requirement to wear masks, gloves and use hand sanitizers. In conjunction, Olympia Weekend took place, with an anticipated attendance of 3,000 people. Usually held in Orlando, the weekend is estimated to have a $7.7-million economic impact. After hitting rock bottom in April, tourist tax revenues began to pick up and in October, the county collected around $7.7 million. Although a 69% decrease on the year, the collection continues to increase month on month.

The holiday season could provide further support as the convention center and the tourism industry at large get back on track. The center got inventive as it launched the Orlando Winterfest and Holiday Market, beginning Dec. 3. But with 125 vendors offering live music, entertainment and even a snow zone, convention center authorities required a commitment to health and safety guidelines.