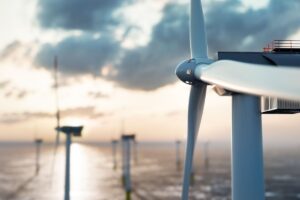 The joint venture between PSEG and Ørsted is expected to provide 500,000 homes with clean energy and provide thousands of jobs across the state. The two firms awarded the construction contracts are Lawrenceville-based JINGOLI Power, LLC and Morristowns’ Burns & McDonnell Engineering Company, Inc. They will install two high voltage substations and just under 9 miles of underground cable that will connect the offshore wind farm to the onshore electric grid.

The offshore wind farm will also help to boost the state’s supply chain initiatives.“We aim to be America’s leader in offshore wind, not just in terms of the amount of power — our objective is 7,500 megawatts — and not just because of the clean energy but because companies will make large components for that industry in New Jersey. We have two massive ports and companies will make up a significant amount of the supply chain in New Jersey,” stated Gov. Phil Murphy in an interview with Invest:.

Developments in response to the state’s growing offshore wind industry, such as EEW’s monopile manufacturing plant at the Port of Paulsboro, are driving a great deal of immediate economic activity in the region in addition to their economic impact over the long term.

The expansion of the state’s supply chain industry equates not only to increased GDP but increased quality of life. “The National Association of Manufacturing had a listing of what a New Jersey manufacturing person makes in a year and it’s $94,000 a year on average. That’s a pretty good wage that you can raise a family on and buy a home,” said John Kennedy, CEO of the New Jersey Manufacturing Extension Program with Invest:.

“The awarding of these construction contracts marks significant milestones in moving the state’s first offshore wind project forward,” said Grant van Wyngaarden, head of procurement at Ørsted North America in the press release. “We are focused on doing all we can to meet the state’s timeline for delivering the Ocean Wind 1 project, hiring locally, creating job opportunities, and encouraging supply chain growth to help the offshore wind industry mature in New Jersey.”

Kim Hanemann, President and COO of PSEG similarly spoke with Invest: on the efforts underway to double down on green energy investments. “I’ve talked about resilience and the investments we are making to ready the system for electrification and reduce greenhouse gasses. That aligns both with our programs and public policy. In a broader sense, beyond PSE&G, we’ve invested in offshore wind power,” said Hanemann, with PSEG having a 25% ownership of Ørsted’s Ocean Wind offshore wind farm project.

JINGOLI Power will lead the engineering, procurement and installation of the underground electric export cable and duct bank/manhole system from landfall to B.L. England, the onshore electric substation site in Upper Township. The company will also provide job training and apprenticeship opportunities to local residents and teenagers interested in STEM careers through its Competitive Edge program, with the goal of keeping project dollars in the community and strengthening the local economy.

Construction is anticipated to begin in September 2023.