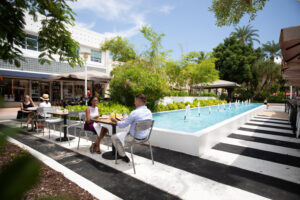 2 min read March 2021 — It’s no secret that restaurants were hit hard by the COVID-19 pandemic. In Miami, the hit hasn’t been as hard as other big cities, such as New York. While New York City has indoor capacity at 35%, Miami restaurants are packed wall to wall at full capacity. Restaurateurs from the Big Apple have taken notice.

New York City-based Avra Group made the decision to expand Avra Estiatorio to South Florida prior to the COVID-19 pandemic. Opening as part of Acqualina Resort & Residences in Sunny Isles Beach, the upscale Greek restaurant joins the ranks of a New York City location and a Beverly Hills location. Avra Group co-owners Nick Tsoulos and Nick Pashalis have seen the influx of restaurateurs to Miami firsthand.

“We began negotiations before the pandemic, before there was a gold rush to come to Miami to open restaurants,” Tsoulos told Miami New Times.

One of the most buzz-worthy moves to Miami was that of Pastis, a quintessential New York City bistro. Featured in iconic New York television shows like Sex and the City and The Sopranos, Pastis put Lower Manhattan’s Meatpacking District on the map as chic and fashionable in 1999. Soon, it will bring its French fare to Wynwood.

James Beard Award-winning restaurateurs Keith McNally and Stephen Starr are behind the project, though they too decided on Miami pre-pandemic. However, with beautiful weather and growing clientele in the area, the team is shifting its energy toward Miami long term, with many new projects up their sleeves. They are looking for a South Florida site for Buddakan, a New American Asian cuisine chain.

“Our company is making a strategic decision to shift a lot of our openings to Miami,” said Starr to Page Six. “It is nice to go somewhere where people are going out and so many people are outside.”

While Starr loves New York City, he said he must shift investments to Florida because no one knows when New York will “come back.”

“I love New York and there is nothing that gets my adrenaline pumping more than an opening in New York,” said Starr. “But now it’s very hard. We don’t even have 50 percent capacity.”

Gov. Ron DeSantis lifted many COVID-19 business restrictions for Florida in September. With the clubbing industry still weakened by COVID-19, restaurants have taken center stage within Miami’s entertainment market. That’s when many food service establishments flocked to the warm climate.

Felix Bendersky of F+B Hospitality Leasing, which concentrates on restaurants, clubs and hotels, has seen expansion within Miami beyond New York businesses.

“Just off the top of my head I can count more than a hundred who signed leases. I show space to 15 to 20 groups a day,” Bendersky said to the New York Post. “They are from New York but also from Canada, Los Angeles, San Francisco and Las Vegas.”

Bendersky said he has clients who have abandoned projects in Brooklyn and Manhattan because they can begin work and commerce in Miami right away. Though the COVID-19 positivity rate is still high in Miami, the city offers undeniable business opportunities that out-of-state restaurateurs are finding hard to pass up.