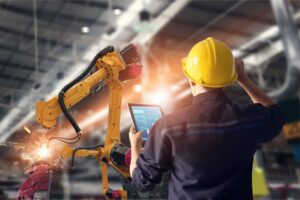 2 min read February 2022 — Nashville continues to attract leading advanced manufacturing companies, with two deals announced for the region in January — Fiberon will establish a new manufacturing and distribution facility in Columbia and Parkway Products will expand its operations in Green County.

North Carolina-based Fiberon, a manufacturer of alternative decking, railing and cladding, will create 310 new jobs in the next five years as it expands its operations, the Department of Economic and Community Development announced on Jan. 26. And Parkway will invest $5.7 million to expand its current manufacturing base, creating 160 new jobs at its injection molding facility, the state announced on Jan. 5.

Already, car manufacturing makes up a sizable portion of Tennessee’s advanced manufacturing base, with more than 16,000 electric vehicles produced in the state each year, accounting for 40% of the Southeast’s electric vehicle manufacturing jobs and $4.2 billion in investments, according to a report published in August 2021 by the Tennessee Advanced Energy Councilopens PDF file , with research conducted by the Howard Baker Jr. Center for Public Policy at the University of Tennessee.

Nashville-based Bridgestone Americas, a subsidiary of Bridgestone Corp., is pioneering in “intelligent tire” manufacturing, using sensors and artificial intelligence for delivery vehicles, especially in e-commerce sites like Amazon, according to a Wall Street Journal report.

The Nashville area is well-positioned to attract and maintain an advanced manufacturing base, with over 158,000 residents in the state employed in the sector, over 2,500 businesses located in the state and $12.4 billion in capital invested since 2016, according to the Tennessee Department of Economic and Community Development.

Attractions for companies include the state’s relatively low tax rates and an educated, skilled employee base to draw from.

“Our K-12 school systems have made great strides in listening to our existing employers over the last few years, partnering with Columbia State Community College to bring dual enrollment programs that are focused on advanced manufacturing,” said Wil Evans, president of the Maury County Chamber and Economic Alliance, in an interview with Invest:. “By participating in this Engineering Systems Technology program, high-school students have the opportunity to earn an associate degree upon graduation and go right to work in a high-skilled, technical job.”

Throughout the state, and in the Nashville area, advanced car manufacturing continues to be one of the top sectors, with new projects continuously announced.

“The largest movement this past year has been around the automotive industry. General Motors and Ultium Cells have announced two huge investments in Maury County,” Evans said. “GM will be adding the all-new Cadillac Lyriq electric vehicle to their production line-up in Spring Hill and Ultium Cells will be producing the battery systems to power the Lyriq, as well as other EVs in General Motors’ portfolio. With the race to carbon neutrality, it’s exciting to serve as one of General Motors’ crown jewels and be on the forefront of the electric vehicle industry.”

Elsewhere in the state, Ford announced in September plans to build a $5.6 billion mega-campus dedicated to electric vehicle manufacturing in Stanton. Named BlueOval City, the complex is expected to generate 6,000 new jobs and will “reimagine how vehicles and batteries are manufactured”, Ford said in a press release. The facility will be one of the largest auto manufacturing hubs in U.S. history, covering nearly six square miles.

“West Tennessee is primed to deliver the workforce and quality of life needed to create the next great American success story with Ford Motor Company and SK Innovation,” said Tennessee Gov. Bill Lee in a press release. “This is a watershed moment for Tennesseans as we lead the future of the automotive industry and advanced manufacturing.”

Statewide, advanced manufacturing companies exported $597.7 million in value in 2017, with primary trade partners including Mexico, Canada, Japan, China and Germany, according to a White Paperopens PDF file by the Department of Economic and Community Development.

Smaller cities are also seeing the benefit. Lebanon, located just east of Nashville, garnered a $3.3 million investment from Nashville Box, LLC to set up a new operations base, according to a state release. The deal from the corrugated box manufacturer is just one of 14 economic development projects announced in Wilson County in the last five years, totaling 4,700 job commitments and $967 million in capital investment, according to state data.

“I’d also like to see more high-level advanced manufacturing,” said Rick Bell, mayor of the City of Lebanon, in an interview with Invest:. “Right now, we have Royal Canin, which is investing about $200 million to expand its operations here. We have a great deal of investment here already in terms of logistics and manufacturing, and I think we’re ready for that next step to enter more higher-level sectors, such as technology and medical.”