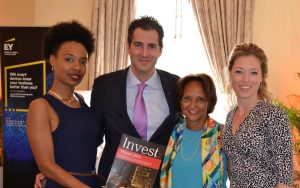 was the initial vision of the World Strategic Forum, and how has it developed over the years to what we see today?

A lot of the forums in Miami deal with solely Latin America, but we want to bring all the regions together. There’s still a strong component of the Americas, but there’s also a large component for Asia and Europe. Miami has a mixed population. There is an increasing amount of Europeans living here, as well as people from Africa and Asia. People come from all over the world to Miami to do business.

The airports and ports are increasing the amount of trade they do and expanding their shipping mandates beyond Latin America. A lot of the cargo shipping contracts are with China, for instance. Miami International Airport is running daily flights to the Europe and the Middle East.

What is the significance of holding the forum in a place such as Miami and how does the audience here differ from other locations like Paris or in Canada?

Miami, it’s a brand by itself. It has a lot of appeal, and people tend to come here with their spouses or family so that they can have  a vacation as well as attend the forum. The Biltmore in Coral Gables is a perfect location for us. It’s a nice area, and on the practical side, we don’t lose our clients up to 2 o’clock on the beach.

There has been a lot of infrastructure development in Miami. So in the 2017 program, we had a bigger component on infrastructure. There’s also a large section on cybersecurity, which is another big issue in Miami. But it’s a work in progress. We’re developing new content for 2018. It will bring a different identity to the Miami conference that will make a difference from all the other events.

We don’t want to have an event in Miami and then have a similar one in Paris because they would be competing even though the same organization. However, the branding makes a big difference. Those attending the event in Miami have a unique experience.

How can we ensure that innovation and ideas are nurtured across borders?

There’s not enough communication between countries. Latin America is a perfect example in that it is a group of countries that don’t connect enough on a regular basis. They are a number of countries with a lot to share, but there isn’t enough dialogue. In our mind, unity is the key to everything. For example, even though the UK has voted to leave the European Union (EU), Europe has never been so strong. It’s amazing how the different EU states communicate and trade with each other. They exchange policies, and they have regulations that don’t just affect one country, but the entire union.

Given the recent political change in the U.S. What are the biggest challenges to cross-border corporation in the Americas?

President Donald Trump wants to redefine all the agreements between Canada, Mexico and the US. This is not exactly a bad thing, because they’re old agreements that need updating for all parties. Now it’s an opportunity to go back to the drawing board, but the biggest obstacle is the change in governments.

There next general election in Mexico is scheduled for 2018, so we’ll get a chance to see what the reaction is there. Mexico is a huge market for the US, and it’s bad to have economic or commercial conflict with your next door neighbor.

What is the biggest issue that has an impact on the global economy?

The threats to cyber security are worrying. The autopilot systems in airplanes and computer systems in cars make them vulnerable to hacking. There are a lot of smart technologies and innovation in industry at the moment. Yet there isn’t enough regulation to stop hackers. Smart technology is becoming a part of our everyday life, with the Internet of Things. It is even being used in the healthcare industry. Threats to cybersecurity can mean life-threatening situations. There needs to be industry-wide best practices to prevent serious incidents caused by hacking. This takes some kind of international consensus, which means cross-border cooperation.