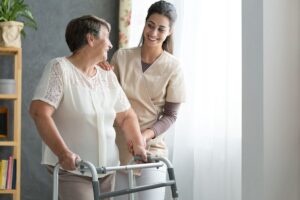 2 min read December 2021— As a new year approaches, both the public and private sectors in Atlanta are working to tackle labor shortages in those healthcare segments that need it the most, namely mental health providers and nursing homes.

In January, a bill to address mental health will be filed in Georgia’s State Assembly. In the midst of growing demand, the bill will encourage the training of mental health professionals by expanding the eligibility for student loans.

“We have a group of leaders very much on a bipartisan level who all recognize that we have to do better. And this is the time to do it,” former state representative Kevin Tanner told the Atlanta Journal-Constitution, while highlighting the urgency of the bill.

Throughout 2021, mental health professionals in Atlanta struggled to keep up with increasing demand for their services. The stress of dealing with the worst health crisis in 100 years, combined with economic and social unrest, drove more and more people to seek the help of a therapist, counselor or psychiatrist. In many cases, mental health professionals had to use waiting lists to avoid turning away patients.

Since the onset of the pandemic, the Department of Behavioral Health and Developmental Disabilities’ mental health hotline that serves Atlanta and the rest of the state saw a 24% increase in calls. Over the same period of time, the department lost 26% of its workforce, reducing the capacity of the state to handle a demand that is expected to double when a new line is introduced in the summer of 2022.

Similarly, nursing homes in Atlanta are also making plans to attract more workers as demand for their services continues to grow.

During the pandemic, many workers decided to leave senior care providers due to poor working conditions that include concerns about exposure to the coronavirus, low wages and work exhaustion. According to an analysis by the Atlanta Journal-Constitution, many nursing homes in the state rank low for federal staffing levels.

“I don’t think we have peaked at our staffing challenges yet,” Health Management CEO Debbie Meade told the Atlanta Journal-Constitution. She also acknowledged the dire prospects for recruiting and retaining staff, particularly in the current job market.

Compared to other industries that are dealing with labor shortages, nursing homes cannot adjust their schedules to accommodate a shrinking staff as they need to provide services on a 24/7 basis. As a result, a prevalent strategy is to pay higher wages and incentives to retain workers. Georgia might also need to follow other states with similar problems and ask the local government for aid to cover staffing and operational expenses as occupancy rates fall.