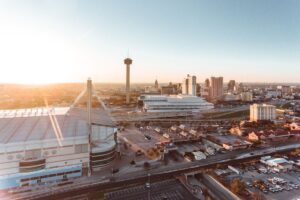 2 min read August 2022 — As travel and tourism continue to come back full swing, conversations surrounding the rate of recovery have been center stage. Now, as the numbers start to top pre-pandemic levels, a new report reveals that while the tourism industry in Texas and the Alamo City is trending positively, there are still some areas needing improvement.

A new report from the opens in a new windowAmerican Hotel & Lodging Associationopens PDF file states that the tourism industry is indeed turning a corner and the U.S. is on pace to outperform pre COVID-19 hotel room revenue numbers. According to the data, the country is set to top 2019 numbers by $18 billion and reach $188 billion this year.

A 9% gain over 2019 is expected for Texas as hotel room revenue is expected to exceed $13.1 billion by the end of the year. Nationally, however, the state is behind in overall recovery. There are 11 states expected to see room revenues increase by 20% or more compared to pre-COVID figures.

“After a tremendously difficult two and a half years, things are steadily improving for the hotel industry and our employees. This progress is testament to the resilience and hard work of hoteliers and hotel associates, who are welcoming back guests in huge numbers this summer,” said American Hotel & Lodging (AHLA) President and CEO Chip Rogers in a opens in a new windowstatement. “While these findings highlight the important role hotels play when it comes to creating jobs, spurring investment and generating tax revenue in communities across the country, they also underscore the lingering challenges posed by one of the tightest labor markets in decades.”

Revenue generated per available room, or REVPAR, is also on the list of improvements for industry leaders. The positive side is San Antonio was closest to matching REVPAR from the first quarter of 2019 among Texas regions. However, according to the AHLA report, REVPAR is not expected to top 2019 levels until 2025

San Antonio also had the opens in a new windowlowest room supply growth among the five largest Texas metros since the first quarter of 2019. Hotels in the heart of San Antonio have an additional challenge as they are more dependent on convention and group business, which is still lagging behind.

As the tourism industry continues to rebound in the state, there are organizations and programs available to give them the boost they need. The opens in a new windowTexas Travel Industry Recovery Grant Program (TTIR) program offers one-time grants of up to $20,0000 to businesses in industries including the arts, entertainment, food service, recreation, trade shows, conventions, breweries, wineries and distilleries.

TTIR will administer $180 million in funds to businesses that suffered losses during the pandemic. The Governor’s Office of Economic Development and Tourism will also host a series of webinars to provide more information and answer questions about the application process.

“Travel and tourism is a critical component to both the state and local economies,” said Governor Greg Abbott in a opens in a new windowstatement. “Visitor spending at Texas destinations brings new money into communities and spurs local job creation across industries in every region of the state. After a decade of record expansion where 1 in 10 Texas jobs were supported by tourism, the travel industry was among the hardest hit by the pandemic. While direct travel spending in Texas is recovering at a faster rate than national averages, allocating these grant funds paves the way for a more prosperous, brighter future for all Texas communities.”