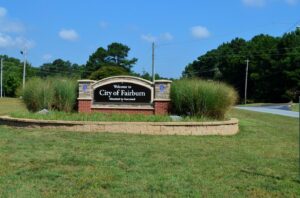 2 min read October 2020 — In Georgia, the coronavirus pandemic pressed the brake on a decade of continuous growth and continuous recognition as one of the top states for business in the nation. Locally, counties and cities reeled as the pandemic impacted the lives of residents and changed the way business and municipalities operate in the new normal.

Located in Fulton County, the city of Fairburn rode the challenging pandemic-driven learning curve, while staying true to its slogan, “situated to succeed,” as it positioned itself to move forward in a post-pandemic world. As evidenced by significant streetscape improvements in its Downtown and the approval of a new Global Impact Academy, the city experienced key economic development wins throughout 2020 that are set to pay dividends in a not-so-distant future.

Throughout this year, Fairburn’s Downtown area maximized the lull in pedestrian and vehicular traffic to begin a major facelift to the area while also considering the future of Downtown. The Fairburn Streetscapes Project was among the Downtown beautification projects that kicked off during the pandemic. The project consists of median and signal upgrades throughout Downtown with a focus on repaving sidewalks and pedestrian walkways while also improving the surrounding street lighting. The project also includes the rehabilitation of the former Smith Street underpass into a pedestrian walkway and plaza space. “Downtown improvements are moving forward and Downtown Fairburn is getting a new look,” Fairburn Mayor Elizabeth Carr-Hurst told Focus: Atlanta. “As you drive through Downtown, you can see the construction of the Downtown streetscapes,” she said. The total cost of the Streetscape Project is estimated at $5 million, and was made possible via the Atlanta Regional Commission’s Livable Centers Initiative grant. To continue guiding the growth that is expected to come to Downtown, the city hired a Main Street manager and an economic development director and was awarded a $100,000 grant from the Atlanta Regional Commission to conduct an update to the Fairburn Downtown Master Plan. “We anticipate more exciting development and initiatives will continue to happen in Downtown in the months and years to come,” Carr-Hurst said. “The Downtown Master Plan will provide a strategically focused, goal- driven blueprint for growth and development, which will invigorate the Downtown area and make it an attractive place to live, work, and play.”

Earlier this year, the Fulton County Board of Education approved the name Global Impact Academy for a new South Fulton STEM Magnet School located in Fairburn. The project broke ground in December 2019 and is expected to begin instruction come the 2021-2022 school year. The school will serve students in grades 9-12 and will focus on providing a rigorous STEM curriculum and an environment where students can attain the knowledge and skills to make a positive global impact.

The opening of the new Global Impact Academy points to the growth in population and efforts to diversify the local business community. “Fairburn is a bedroom community and in 2004, the population was around 7,683 people. By 2018, we had expanded to 15, 882 people and I estimate this year’s census will show our population at around 18,000-19,000. We are steadily growing,” Carr-Hurst said. “In 2019, our revenues were up and we got a lot accomplished. We were carrying out a great deal of development on our main Highway 74 corridor, where we finished a luxury apartment complex of about 325 units, as well as a Park & Ride project through an intergovernmental agreement with South Fulton CID. On Highway 74 in 2019, I believe we set up over 10 new businesses, which is great for our city.”

The city’s proximity to Atlanta and the Hartsfield-Jackson Atlanta International Airport are likely to bolster its growth in a post-pandemic world, mainly as it relates to the logistics, manufacturing and industrial sectors. “We want to diversify our economy as much as possible. We have companies such as Clorox, Google, and Smuckers in the city and we continue  to attract many prestigious businesses, and the main reason for this is our privileged location close to the airport,” Carr-Hurst said.

Moving forward, though 2020 was a challenging time for the entire world, it also marked positive developments for the city of Fairburn in the midst of uncertainty. The revitalization of Downtown is set to usher in new opportunities as the region moves away from the coronavirus landscape. “Looking forward, The Fairburn Streetscapes Project will have a huge positive impact on the city,” Carr-Hurst said. “The project has already begun, and we are looking forward to a new Downtown as Fairburn’s slogan is ‘situated to succeed.’”

To learn more about our interviewees, visit: https://www.fairburn.com/