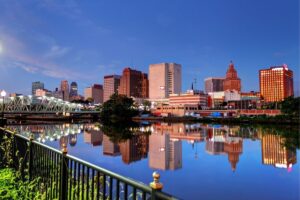 2 min read March  2022— New Jersey’s economic landscape is changing. As the pandemic spurred a migration out of densely urban cities into more suburban communities, New Jersey saw Manhattan and Philadelphia residents crossing state lines and moving into suburbs across the region. Already known for its density and high cost of living and doing business, the result was predictable: higher prices in an already expensive market.

Fortunately for many across New Jersey, the state likewise has a higher rate of pay compared to other markets, with 2020 household median income at $85,239, comparing favorably to the national average of $67,521. The difference underscores New Jersey’s position as the fourth-highest paid state by median household income, behind only Washington, D.C., Maryland and Massachusetts.

“We drew three times as many new net households from migration in 2020 versus 2019,” said Bergen County Executive James Tedesco, in an interview with Invest:. Eastern Monmouth Area Chamber of Commerce President Jennifer Eckhoff added: “There is an amazing number of people who are new to the area. A lot of people took the opportunity to move out of the city with their families.”

As a result of the ongoing reassessment by individuals of their living situations, housing across New Jersey has reached a fever pitch, with real estate firm Redfin noting that home prices statewide were up 9.7% year-over-year in February. In 2021, bidding wars became the norm, and according to data from the Otteau Group, prices will grow around 5% for 2022, reports NJ.com.

On the commercial side, industrial and multifamily products are in the spotlight. “Everyone is aware that industrial and multifamily are the darling asset classes today,” Camber Real Estate Partners Managing Principal Christopher Bellapianta told Invest:. “Separately, submarkets within Northern New Jersey that two or three years ago would have been perceived as ‘secondary’ are now in demand from prospective users because there is a dearth of supply and continued surging demand for industrial space.”

While communities across the state have noticed the shift, the private sector, still grappling with the impact of remote work, has noted the ongoing changes as well. Hawk Strategies Founder and CEO Anthony Attanasio remarked in an interview with Invest: that the changes could lead to a more competitive New Jersey, should the state’s counties and municipalities capture the moment. “With offices remaining closed, we in New Jersey and the other bedroom communities of New York, as well as Philadelphia, need to try and capture that new hybrid work dynamic,” he said. “I grew up in central Jersey and am the son of a former lifetime commuter. I’ve been to New York a bunch of times since COVID began, and it’s shocking now how few people there are during the workweek. You come up from Penn Station and there’s no huge swarm of people anymore.”

For Eckhoff, the changes that have transpired are permanent.  “We’re not going to go back to the way things were because our lives have been changed. Everything has changed.”

Despite the ongoing growth and its challenges, Bergen County is ready, said Tedesco. “The Wall Street Journal did an article last April on Bergen County on suburban growth because we are one of the fastest-growing regions in the entire country … The good thing about Bergen County is that we have planned for growth. Our economic development and planning teams created a six-year outlook for how we manage growth in terms of cost, service and manpower. As a result, we have been able to meet the growth and prosperity with enough workforce and services to match the increasing demand.”