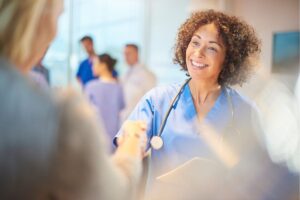 2 min read May 2022 — Over the past two years, the good and bad of the nation’s healthcare system have been exposed. Many health systems and facilities across the country have responded to the growing needs of their community with expansion, renovation and restructuring. Systems in the Greater Cincinnati region have followed suit, with several developments in the works.

Demolition recently began at UC Health for the largest construction project in the academic health system’s history. The $251 million investment is the next piece of the Clifton Campus Revitalization puzzle and the extensive renovation and expansion is long overdue.

“It has been a true collaborative, group effort to reach this point, and seeing what’s to come inspires our whole team,” said Arthur Pancioli, MD, professor and Richard C. Levy Chair of Emergency Medicine at the UC College of Medicine and a UC Health physician, in a press release. “As the region’s academic health system and only adult Level I trauma center,” he continued, “it’s our privilege to care for the most complex and critically ill patients across our community – and these new facilities will help us bring even more hope to Cincinnati.”

The renovation of the Emergency Department at UC Medical Center is a top priority of the project. The department, which has not been upgraded in 30 years, will double in size with this expansion. The project will also include a new four-story building for additional operating rooms and two new garages, which will add 1,300 parking spaces for the center. Both the new surgical building and the renovated Emergency Department building are scheduled for completion by summer 2023.

In February, Springfield Township approved the final plan for its largest economic development project in over 30 years. TriHealth is opening a two-story, 57,000-square-foot outpatient facility to serve as a one-stop shop healthcare destination. The facility will offeropens WORD file cardiology, general surgery, physical medicine and rehabilitation, orthopedics, obstetrics and other services. Patients will also have access to outpatient services and urgent care.

With a $30 million investment, this marks the 13th ambulatory care campus in Greater Cincinnati for TriHealth. The medical facility plans to employ 120 professionals and support staff following completion in the fall of 2023. Three TriHealth facilities will be consolidated once the Springfield Township development is completed, which includes a Group Health pediatric and primary care office in Finneytown and practices on Glenway Avenue and Groesbeck Road.

On the East side, Mercy Health – Cincinnati is constructing a new healthcare campus in Mason. The $156 million complex will feature a 60-bed hospital, an Emergency Department, four operating rooms, a Level II Cath Lab and eight ICU beds.

The project, split into two phases, is scheduled for completion by the end of 2023. This is the first new hospital construction in the Greater Cincinnati area since 2014 and is expected to bring 275 jobs to Mason.

“We’re very excited to welcome one of the largest health systems in the country and in the region, Mercy Health, to the City of Mason,” said City of Mason Mayor Kathy Grossmann in a press release. “City Council’s priority is to foster a culture of wellness for our residents and this development aligns with that commitment.”