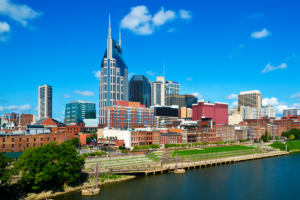 2 min read May 2021 — After a tumultuous year, things are finally starting to return to normal in the Nashville region.

On April 27, the Metro Public Health Department announced that all capacity limitations in Nashville will be lifted on May 14, with the city’s indoor mask mandate remaining in effect. The decision was made in response to slowing infection rates and rising vaccination rates. “As of today, over 40% of Nashvillians have received a vaccine, and we are committed to getting that number up in the coming weeks,” Nashville Mayor John Cooper stated.

The removal of capacity limitations will help to rejuvenate the hospitality, food and entertainment industries that have been hurt significantly by the lack of attendance during the pandemic. Overall, Nashville’s economy seems to be picking up speed at a much faster pace than other regions.

According to the most recent numbers, the Nashville region’s unemployment rate stood at 4.3% for March, while the state average and national average were 5.0% and 6.0% respectively. A diverse, attractive business environment is responsible for the region’s robust recovery.

“Nashville is growing. Businesses are coming in and building their headquarters in Nashville because Tennessee does not have a state income tax. That makes it attractive from both a business and a personal standpoint,” Mark Nolan, managing partner of Batson Nolan, told Invest:.

Nolan highlighted some of the specific investments that have been made, including Amazon, which has its Operations Center of Excellence here, and Oracle’s announcement that it will come to Downtown Nashville in a $1.2 billion investment. The Metro Council will decide on final approval for Oracle’s move on Tuesday night.

At this pace, the region will soon return to its strong, pre-pandemic unemployment levels of below 3%, and the state as a whole is on track to recover as well.

According to The State’s Economic Outlook, January 2021opens PDF file , “Economic activity in Tennessee, as measured by inflation-adjusted gross domestic product (real GDP), is projected to fall by 3.5 percent in 2020 due to the pandemic and pandemic-related responses.” Although GDP took a dive throughout 2020, a swift recovery is anticipated. “Tennessee real GDP will increase by 2.9 percent in 2021 and 3.6 percent in 2022. Tennessee real GDP is projected to surpass its pre-pandemic peak level by the end of 2022.”

Given that the Nashville region tends to outperform the state as a whole, it’s likely that Nashville will surpass its pre-pandemic peaks in an even earlier time frame.

In its 2019-2020 annual reportopens PDF file , the Nashville Area Chamber of Commerce said the region “has experienced tremendous growth. This year, we welcomed 29 new company relocations and 35 corporate expansions, creating over 5,700 new jobs in the region.” With multiple large investments on the horizon, such as Oracle’s campus that will bring 8,500 jobs to the city, it seems there is nowhere to go but upward for the region’s economy.