Nashville a ‘magnet’ for new business

Nashville a ‘magnet’ for new business 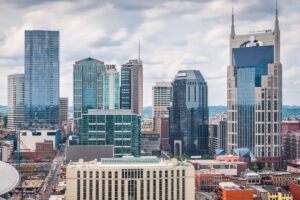 2 min read September 2021 —  The Nashville market is continuing to attract new business in sectors from real estate to technology — an economic boom that only increases the area’s attractiveness as a banking hub.

Despite COVID-19, or perhaps even because of the pandemic, Nashville’s boom is continuing unabated, with software and technology firm Oracle announcing plans to relocate here from California. The national corporation is pledging to create almost 6,000 jobs and invest $1.35 billion to create a new campus in the city. In a Sept. 7 meeting, the state’s Funding Board approved a $65 million incentive for the company to relocate, according to local news reports.  The draw for Oracle — and for other major companies making a home in Nashville like Amazon, AllianceBernstein, EY and SmileDirectClub — is a friendly regulatory and tax environment for business.

“The economy is diverse and driven by job creation, commercial real estate and social opportunities for everyone. There are so many things going on that the region is like a magnet that attracts people,” said Jeff Agee, chairman and CEO of First Citizens National Bank, in an interview with Invest:.

The area’s banking deposits stand at $89.15 billion, according to the latest Federal Deposit Insurance Corporation report. Total deposits are up over 70% from just five years ago, with Nashville-based Pinnacle holding 16.43% of the market share and Bank of America trailing with 16.41%.

National bank brands continue to expand in the area, with JP Morgan Chase opening its 10th branch in the area just this month and plans for further expansions for Chase are set to continue. The national bank plans to eventually open 20 banks in the Nashville area, according to the Nashville Business Journal. Other banks are also expanding into the area, with PNC National Bank opening three branches in Middle Tennessee since July 2020.

And after asset management company AllianceBernstein relocated to Nashville in 2018, the city has scored yet another major win for the finance industry this year, with Boston-based SVB Leerink, a leading investment bank, opening an office in Nashville in August. SVB Leerink chose Nashville to open its fifth branch because of the area’s growing healthcare services and technology sector.

Brad Houser, president for Middle Tennessee of BankTennessee, told Invest: in an interview that things like low taxes, a good labor pool, a strong education system and being centrally located in the United States are positive factors for the continued development of the Nashville banking market.

“As a result of these factors, I think the outlook is very good. Will a rise in short-term interest rates affect our market? Sure. But depending on the national economy, an increase in short-term rates will be beneficial to some industries. I think, long term, we have a lot of areas for future development, so I think it’s a good time to be in Middle Tennessee and it’s a good time to be a banker in Middle Tennessee,” he said.

Regions Bank, a primary player in the market, also just opened a rebuilt branch in North Nashville in April. The new branch is in the same location as a previous branch that was destroyed by a tornado in March 2020.

While the banking industry has some challenges ahead, including low interest rates and economic uncertainty related to COVID-19, strong positives in Nashville like a booming real estate market and pent-up demand have kept bankers busy, Bradford Vieira, executive vice president and regional CEO at ServisFirst Bank, told Invest:.

“We are busier than we have ever been in our history here in Nashville. … Everything is going to be gangbusters for a little while. We just don’t know for how long it’s going to continue,” Vieira told Invest:.