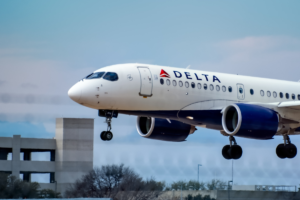 2 min read May 2021 — In a move that shows the aviation industry’s growing confidence in the return of recreational travel, Delta Airlines has announced that it would be adding wide-body aircraft to many of its routes, including one of the airline’s largest hubs, Minneapolis-St. Paul International Airport (MSP).

The wide-body jets, which Delta normally assigns to international flights, are being added to 290% more domestic flights compared to two years ago, according to Airline Weekly. The additions include a handful of routes out of MSP.

In an emailed statement to the Twin Cities Business Journal, Delta spokesman Drake Castañeda said, “We continue to evaluate and adjust our flying, including aircraft utilization, based on customer demand. Many of these upgauged routes include trips to top outdoor, leisure destinations.”

While fliers may enjoy the extra legroom for the time being, the wide-body carriers are usually reserved for international flights, which remain grounded for the most part as the pandemic continues in other parts of the globe. While borders remain restricted or closed to most international travelers, the U.S. federal government will continue paying the industry’s labor costs with federal relief funds through September. As a result, it makes more sense to use the planes than to keep them grounded. Delta has been the most proactive in deploying wide-body aircraft domestically, and has been one of the more aggressive airlines when it comes to implementing strategies to successfully operate throughout the pandemic.

“The expanded use of widebodies by airlines for domestic routes is likely to be short term,” said Patrick Hogan, spokesman for the Metropolitan Airports Commission, which runs MSP airport, to the Journal. “Once international travel demand picks up, they’ll no doubt return most of those planes to service on transoceanic routes.”

“With more and more people excited to resume traveling, we’re thrilled to be able to offer them the opportunity to visit these incredible vacation destinations this winter,” said Sun Country Airlines Chief Revenue Officer Grant Whitney. “We’re really proud to bring our brand of convenient, affordable travel to more cities in the Upper Midwest, so folks can enjoy the vacations they’ve been dreaming about.”

The move comes after an interesting year for Sun Country, which only a few months ago finally went forward with an Initial Public Offering as the first passenger airline to go public in over two years. The airline recently announced that it had turned a profit in its first quarter since going public as well, thanks in no small part to the same federal aid that has Delta flying its wide-body planes domestically.

Photo by Trac Vu on Unsplash